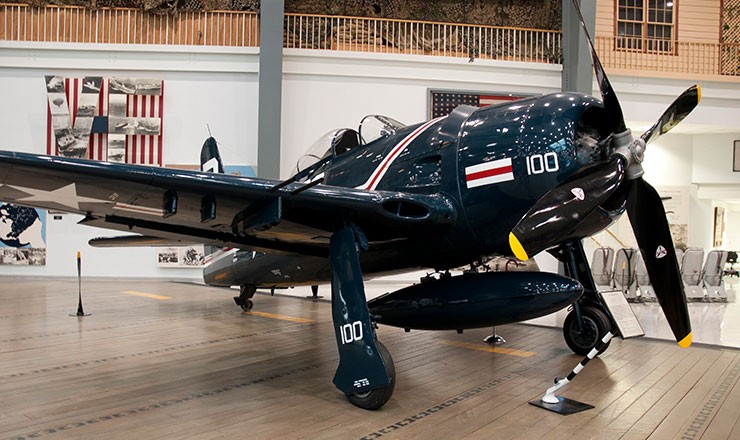 The last, most powerful of Grumman's prop-driven fighters, the F8F Bearcat has been described as an engine with a saddle on it. Born of experience gained by study of fighter operations from carriers, the F8F was built smaller and 2,000 pounds lighter than its F6F predecessor, despite being designed around the big Pratt & Whitney R-2800 engine. The most powerful single-engine aircraft ever built, the F8F out-performed all others in all aspects of combat maneuverability. Too late for World War II, it was used by the French in French Indochina (later Vietnam) in 1953.

After careful study of air combat operations from carriers, Grumman designed the F8F as a follow-on to its highly successful F6F Hellcat. The airplane featured a smaller airframe built around the powerful Pratt & Whitney R-2800 engine, and it weighed 2,000 lb. less than the F6F. The new machine out-performed all fighters of the time in speed, time to climb, quick take off, and combat maneuverability. Pound for pound, the F8F was the most powerful single-engine, propeller-driven aircraft ever built.

Deliveries began in May 1945 with the first aircraft going to Fighting Squadron (VF) 19. V-J Day brought cancellation of the GM contract, however, and reduced the buy from Grumman to 770 aircraft. By 1948, 24 Navy squadrons had been equipped with Bearcats. Later, Grumman received a contract for 126 F8F-1Bs, those aircraft armed with four 20mm cannon vice the .50-caliber guns of the F8F-1. Of that lot, 15 F8F-1Bs were completed as F8F-1N night fighters, equipped with a radar pod under one wing.

In 1948, the F8F-2 was introduced, incorporating , in addition to the four 20mm cannon arrangement, a revised engine cowling, taller fin and rudder, and other modifications. Grumman built 293 F8F-2s along with twelve night fighter F8F-2Ns and 60 photo reconnaissance F8F-2Ps, an example of the latter on display as part of the Museum collection. A unique feature of the test model was the explosive wingtip. Should the pilot exceed 8.5 gs, explosive charges would blow off the outer three feet of each wing to prevent a total wing failure. Because the wing tips could not be made to break off simultaneously, however, the system was abandoned and never incorporated in production aircraft.