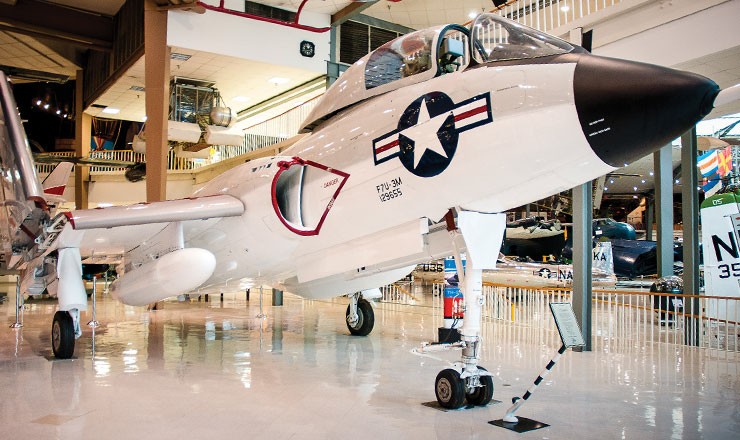 Boasting a unique "tailless" design, the F7U Cutlass incorporated a number of new and advanced features for its time. Designed by Rex Beisel, who also designed the unconventional looking F4U Corsair, the F7U was ahead of its time and the capabilities of available power plants, resulting in its nickname the "Gutless Cutlass." Structural shortcomings and its underpowered engines plagued it, resulting in several deaths and the loss of over a quarter of all F7Us built to operational accidents.

With a history of producing unconventional aircraft, Chance Vought began work on a tailless, swept-wing jet in June 1945. The F7U was the final aircraft designed by Rex Beisel, who also designed the TS-1, the Navy's first aircraft built specifically for carrier operations, and the famed F4U Corsair. Designated the XF7U-1 Cutlass, the prototype made its first flight in September 1948, but experienced immediate difficulties. All three XF7U-1 prototypes crashed, as did two of the first fourteen production aircraft eventually ordered by the Navy. Subsequently, a 1949 order for 88 F7U-2s was canceled in favor of the F7U-3, which incorporated many improvements. It was still underpowered, however, and had a potentially deadly nose-wheel design. The former trait produced the aircraft's unofficial moniker "Gutless Cutlass." All told, over a quarter of all F7Us built were destroyed in accidents.

Variants of the Cutlass equipped a number of Navy squadrons, among them the F7U-3M, which was flown by Attack Squadron (VA) 83 in March 1956, when it went aboard the carrier USS Intrepid (CVA-11), becoming the first Navy squadron to deploy overseas with missiles.

Accepted in June 1954, the F7U-3M Cutlass (Bureau Number 129655) on display in the Museum was stricken from the Navy inventory in 1957. Displayed for many years in Griffith Park in Los Angeles, the aircraft was restored during the early 1990s and arrived at the Museum in 1993.