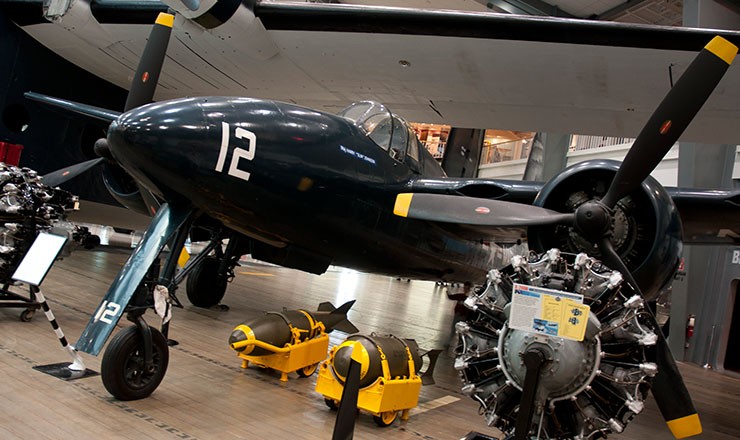 The F7F Tigercat, which was derived from Grumman's first twin-engine fighter, the XF5F-1 Skyrocket, appeared as the result of a Navy request in June 1941 for development of a larger, twin-engine fighter for use on board the planned large aircraft carriers (Midway-class). The airplane was the first twin-engine fighter ordered in large quantities and the first carrier aircraft to incorporate tricycle landing gear. Built in single and two seat variants, the heavily armed fighter served in ground support, night fighter and photo reconnaissance roles after World War II and in Korea.

Ordered by the Navy in June 1941, the XF7F-1 was Grumman's second attempt at a twin-engine fighter, the first having been the unsuccessful XF5F-1 Skyrocket. The new fighter, intended for use aboard the large Midway-class carriers, would be the first carrier aircraft to employ tricycle landing gear.

The new airplane, while designated a fighter, was heavily armed to perform as a ground support aircraft, equipped with four 20mm cannon and four .50-caliber machine guns. It also was capable of carrying two 1,000 lb. bombs on underwing stations or one torpedo under the fuselage. First flown in December 1943, the XF7F-1 was hurried into production to meet Marine Corps demands for 500 of the aircraft to support Pacific operations. Deliveries began in April 1944, but changes in operational requirements led to production delays. With 34 single-seat models delivered, production switched to a two-seat night fighter, designated the F7F-2N, a total of 65 of which were built. Grumman then built 189 F7F-3s, which were similar to the F7F-1, but modified with higher rated Pratt & Whitney R-2800-34W engines.

Further production under the original contract was cancelled as war's end drew near, but a separate contract produced 60 more F7F-3Ns and 13 F7F-4Ns, production ending in late 1946. Both models were configured as night fighters, equipped with radar in an elongated nose, and a larger fin. The F7F-4N was equipped with an arresting hook for carrier operation, the only model in the series so configured. Later modifications produced specially equipped F7F-3Es and F7F-3Ps for electronic reconnaissance and photo reconnaissance respectively.

Too late for service in World War II, the Tigercat served in several Marine Corps squadrons after the war and later performed close air support, night fighter, reconnaissance and utility missions during the Korean War. Well designed, the F7F was one of the fastest fighters of the World War II era. Unfortunately, its operational life coincided with the advent of more powerful, faster jet aircraft, rendering it obsolete after only a few short years.