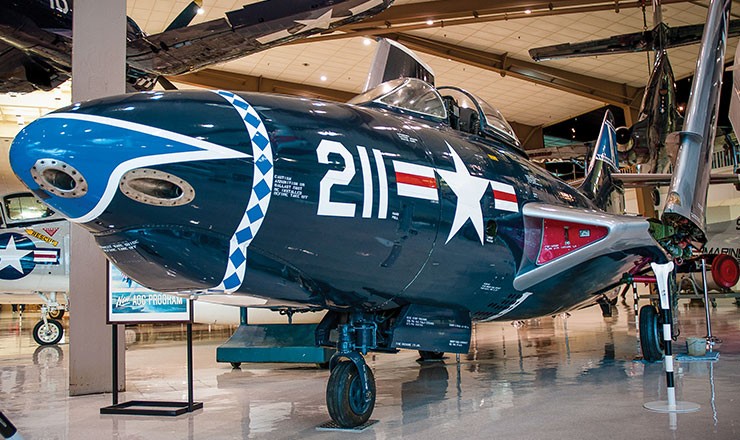 Introduced in 1953 as the swept-swing successor to the F9F Panther, the Cougar was intended for combat over Korea, but arrived too late for the war. The Cougar saw its sole combat in Vietnam, where four two-seat training versions of the aircraft served briefly as forward air control aircraft. The Cougar was an excellent product nonetheless; on 1 April 1954, F9F-6s accomplished the first transcontinental flights to be completed in less than 4 hours, and training variants of the aircraft were used until 1974.

On 18 March 1953, a newspaper headline in the Nevada State Journal announced the news of Soviet MiG-15s intercepting an Air Force RB-50 reconnaissance aircraft operating near Siberia. Appearing below this story, a smaller article reported the Navy grooming a new jet aircraft capable of dueling with the MiG-15 in the skies over Korea. That aircraft was the F9F-6 Cougar, a follow-up design to Grumman Aircraft Engineering Corporation's F9F-2/5 Panther that served throughout the Korean War.

The F9F-6 bore a striking resemblance to its predecessor, but featured a 35 degree swept wing that improved performance from Mach 0.79 to 0.86 at sea level and to 0.895 at 35,000 ft. Follow-on versions incorporated a larger fuel capacity to extend range as well as a modified wing and canopy design.

The Korean War ended before the Cougar arrived in theater, the aircraft instead making its mark in more peaceful endeavors. On 1 April 1954, a trio of Fighter Squadron (VF) 21 F9F-6s completed the first transcontinental flights ever made in under four hours, with record times for the 2,438 mile flight from San Diego to Floyd Bennett Field, New York, of 3 hours, 35 minutes, and 30 seconds; 3 hours, 46 minutes, and 49 seconds; and 3 hours, 48 minutes. The Cougar was also the first swept wing airplane flown by the Blue Angels flight demonstration team (1957-1959).

Nearly 2,000 Cougars were produced for the Navy and Marine Corps, serving as fighter, ground attack, photo reconnaissance, and training aircraft. The first flight of the two-seat trainer version of the F9F-8 Cougar, designated the F9F-8T, was made on 4 April 1956. The Navy acquired 377 F9F-8Ts between 1956 and 1960. They were used for carrier and advanced flight training and, since they were equipped to be armed with twin 20mm cannon and could carry bombs or missiles, for weapons training as well. The -8T was redesignated TF-9J in 1962. The last flight of a TF-9J was made by a Training Squadron (VT) 4 student in February 1974. Ironically, it would be this training version that took the Cougar into hostile skies, a small number of them flown for a time in Vietnam as forward air control aircraft with Marine Headquarters and Maintenance Squadron (H&MS) 11.