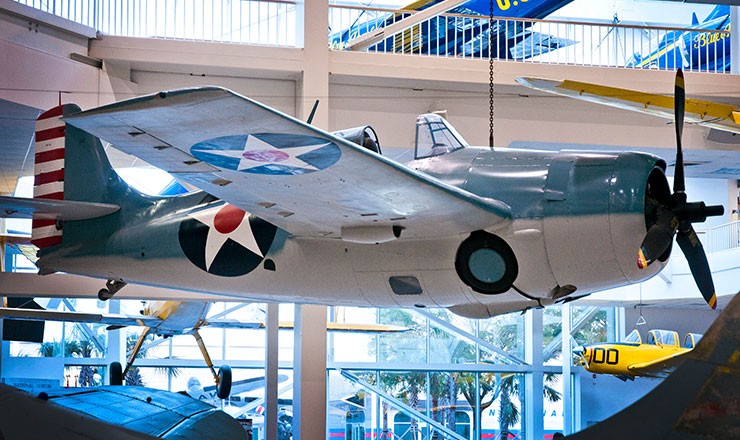 First flown in February 1939, the rugged and heavily armed F4F Wildcat became the Navy/Marine Corps premier fighter until late 1942. By the end of that year, Navy and Marine F4F pilots had amassed a 9:1 kill ratio over the Japanese, despite the reputation of the vaunted Mitsubishi A6M Zero. By war's end the stubby Grumman design had accounted for 1,006 enemy aircraft, and listed 58 aces among its pilots.

Designed as a follow-on to the F3F-2 biplane fighter, Grumman's XF4F, a biplane, was turned down by the Navy in favor of Brewster's F2A Buffalo, a monoplane. Returning to the drawing board, Grumman redesigned the aircraft as a monoplane. The resulting aircraft, the familiar F4F Wildcat, proved to be far more successful than its Brewster counterpart.

In October 1938, an order was placed for an improved F4F-3 incorporating larger wing area, improved tail surfaces, and powered by the R-1830 Twin Wasp engine with two-stage supercharger. The new airplane showed impressive maneuverability, reached a top speed of 333 mph, attained a 33,000 ft. service ceiling and demonstrated an impressive 3,000 ft./min. initial climb rate. First flown in February 1939, the aircraft so impressed the Navy that 54 of the -3 models were ordered to supplement Brewster's lagging deliveries of the F2A.

Actual production models incorporated a lengthened fuselage and a revised armament suite of four .50-caliber machine guns in the wings, along with under-wing bomb racks. Later, self-sealing fuel tanks and pilot armor, while adding weight, degraded performance only slightly. Modifications to engine cooling and cockpit ventilation were later improvements. By 1940, the Navy was examining wider use of escort carriers (CVE). Much smaller than fleet carriers, the CVE's limited hangar and deck space did not permit an adequate complement of F4Fs because the -3 did not have folding wings. Roy Grumman then developed the Wildcat's unique wing-folding mechanism for the F4F-4 (also used on other Grumman aircraft such as the TBF and F6F). Its introduction to the fleet virtually doubled the fighter capacity aboard ship and made the F4F-4 an ideal aircraft for escort and light carrier operations.

By the time the U.S. entered World War II, the enemy already had felt the Wildcat's bite; on Christmas Day 1940, two British Martlet Is (the Royal Navy's designation for the exported F4F-3) downed a German Ju-88 near Scapa Flow, and on 21 September 1941, two Martlet IIs (equivalent of the F4F-4) from HMS Audacity downed a giant Focke Wolf Fw-200 bomber. For the Navy and Marine Corps the Wildcat became a mainstay during the first year of the war. By the end of 1942, Navy and Marine F4F pilots had amassed a 9:1 kill ratio over the Japanese, despite the reputation of the vaunted Mitsubishi A6M Zero. By war's end the stubby Grumman design had accounted for 1,006 enemy aircraft, and listed 58 aces among its pilots.