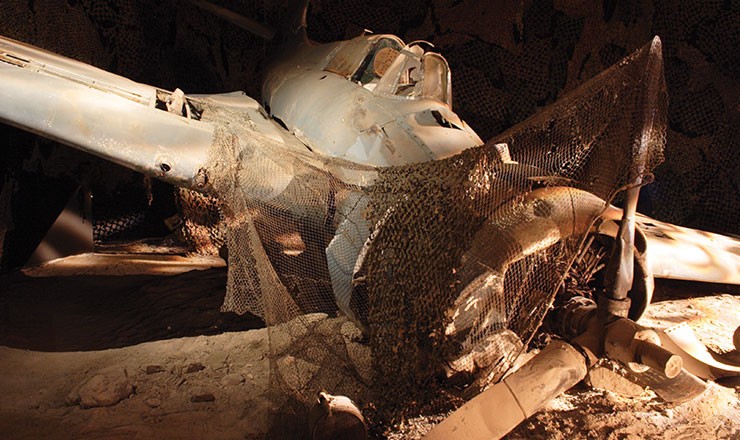 This F4F-3 Wildcat was assigned to Carrier Qualification Training Unit (CQTU) Glenview, Illinois in March 1943. The airplane met its untimely end on 21 July 1943 when, during commencement of a take-off run aboard the training carrier USS Wolverine (IX-64), the right wing tip struck another aircraft, spinning the Wildcat around, whereupon it left the deck tail-first and flipped over into Lake Michigan. Recovered from the lake in 1991, the aircraft is displayed in the condition in which it spent nearly a half century underwater.

Naval Aviation's premier fighter aircraft when the United States entered World War II, the F4F Wildcat contrasted sharply with its primary adversary in the Pacific, the vaunted Japanese Zero. While the former possessed unmatched maneuverability, rate of climb, speed and range, the F4F's strength rested in its ruggedness and firepower. These elements, combined with tactics of mutual defense, most notably the "Thach Weave" developed by Lieutenant Commander John S. Thach, and slashing diving attacks against the Japanese fighter, enabled Wildcat pilots to more than hold their own against their counterparts in the vicious air battles at Coral Sea, Midway, and Guadalcanal during 1942. The Wildcat had its greatest impact in the Pacific, where eight F4F pilots received the Medal of Honor. Yet, it also served in the European Theater, including support of the landings in North Africa and operations from escort carriers in the continuing battle against German U-boats.

An interesting element of the Wildcat was the fact that it featured landing gear that had to be manually cranked up by the pilot using a handle near his right shin. It took thirty-plus turns of the crank to complete the task, a new Wildcat pilot instantly recognizable in the air a few minutes after take-off by the fact that the airplane proceeded to go up and down quickly, the result of the left hand holding the stick inadvertently going forward and back along with the pilot's right hand as he turned the landing gear handle.

The F4F-3 (Bureau Number 4039) in the Sunken Treasures exhibit entered service in September 1941, and initially flew with Fighting Squadron (VF) 5 in the carrier Yorktown (CV-5). Eventually assigned to the training command, it was flying with the Carrier Qualification Training Unit (CQTU) at Naval Air Station (NAS) Glenview, Illinois, on 21 July 1943, when, during commencement of a take-off run aboard the training carrier Wolverine (IX-64), the right wing tip struck a parked TBF Avenger, spinning the Wildcat around, whereupon it left the deck tail-first and flipped into the water.