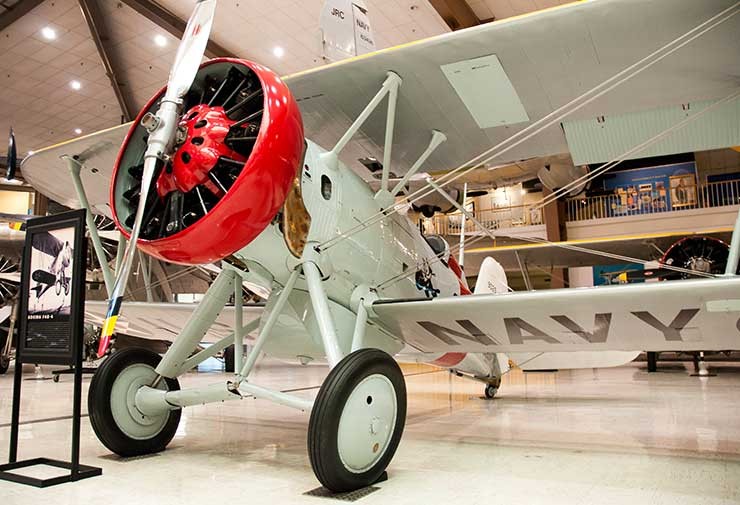 From 1923 to 1937 Boeing produced a series of excellent fighters for the Army and Navy, the last of which was the F4B-4. In 1927 Boeing produced models 83 and 89, designated F4B (Navy) and P-12 (Army), first flown in June and August 1928, respectively. The two models differed in landing gear design, one for carrier operation, the other to accommodate a centerline bomb rack. Highly successful, the F4B-4 was the Navy's first-line fighter from 1932 to 1937. The Museum's aircraft was delivered as a P-12E and modified during restoration to the F4B-4 configuration.

Though best known in later years for producing large bomber or transport aircraft, Boeing produced a series of excellent fighters from 1923 to 1933. The most famous of those biplane fighters, the F4B, was the refinement of design experience gained from its FB, F2B and F3B predecessors.

The Model 100 series, designated XF4B-1 by the Navy and XP-12 by the Army, differed only slightly in design; the Navy version was built for carrier operation (Model 83), while the Army version (Model 89) incorporated a centerline bomb rack and split axle landing gear. The two prototypes flew in June and August 1928, respectively. By May 1929 the F4B-1 had also adopted the split axle landing gear and bomb provision, along with a tailhook for carrier landings.

Deliveries were made to the Navy between June and August 1929. While in service, F4B-1s underwent a number of changes. Individual fairings behind each cylinder were removed, and ring cowlings and modified fins replaced the original type. By 1932, the F4B-2 incorporated the ring cowling, Frise ailerons, spreader-bar axle and a tail wheel for carrier mobility. Delivered between January and May 1931, 46 F4B-2s were assigned to Fighting Squadron (VF) 6B aboard USS Saratoga (CV-3) and VF-5B aboard Lexington (CV-2). In April 1931, the Navy ordered 21 F4B-3s, delivered in December 1931 and January 1932. By July 1932 deliveries of the F4B-4 commenced, with 92 aircraft delivered by February 1933, the last 45 of which incorporated a raised headrest. At the same time, 21 of the new aircraft were delivered to the Marine Corps.

Nimble, rugged and reliable, the F4B-4's debut coincided nicely with advances in carrier operations aboard the new carriers Lexington (CV-2) and Saratoga (CV-3). The aircraft remained the Navy and Marine Corps' first-line fighter until replaced by faster and more powerful Grumman biplanes. From 1937 to mid-1941, the F4B-4 was assigned to training command duties, Pensacola's Squadron Five employing the F4B-4 in the last phase of pilot training.