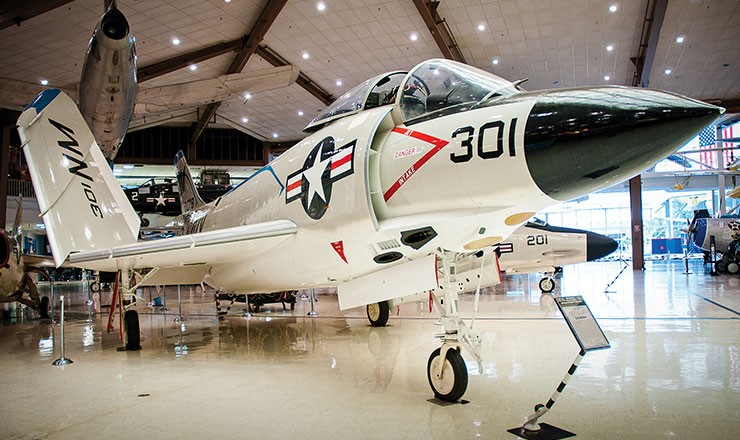 The F3H Demon was McDonnell Aircraft Corporation's first swept wing aircraft, providing the basis for development of the F-4 Phantom II. It was an infamously troubled aircraft; engine problems plagued the first version of the airplane, resulting in eleven crashes and the deaths of four pilots between 1952 and 1955. Later versions of the aircraft were designed for all-weather operations and could carry the AIM-7 Sparrow missile, yet the Demon never shook its troubled reputation.

McDonnell hoped to advance its role building Navy jet fighters with a new design in response to a 1949 request for a short-range jet interceptor. The result was the XF3H-1 Demon, which first flew in 1951.

Troubles with the Westinghouse J-40 power plant immediately threatened the F3H program. Between August 1952 and October 1955, eleven Demons crashed, killing four pilots, which prompted cancellation of the airplane and a Congressional investigation into the Navy's procurement of jet aircraft. Nevertheless, McDonnell stuck with the design, adopting Allison's J-71 engine, a move that allowed for a resumption of production and eventual delivery of 519 airplanes, including the F3H-2M designed to carry the AIM-7 Sparrow air-to-air missile. The improved Demon, however, could not escape its performance limitations, which included lack of power compared to Navy contemporaries, and high fuel consumption that limited range and required sparing use of the afterburner.

Nevertheless, until 1964 the F3H-2 complemented daylight dogfighters such as the F8U Crusader and the F11F Tiger as a carrier all-weather, missile-armed interceptor. The Demon was withdrawn before it could serve in Vietnam where the F-4 Phantom II, itself conceived as an advanced development of the Demon, was a mainstay. Between 1956 and 1964, a total of 23 Navy fighter squadrons flew versions of the F3H Demon.

Accepted by the Navy on 24 May 1957, the Museum's F3H-2M (Bureau Number 137078) spent just over two years in operational service and for many years was displayed at Naval Air Station (NAS) Cecil Field, Florida. It returned to Pensacola in 1999 upon the decision to close Cecil Field, and is displayed in the markings of Fighter Squadron (VF) 193. The Museum's airplane is one of only three surviving Demons.