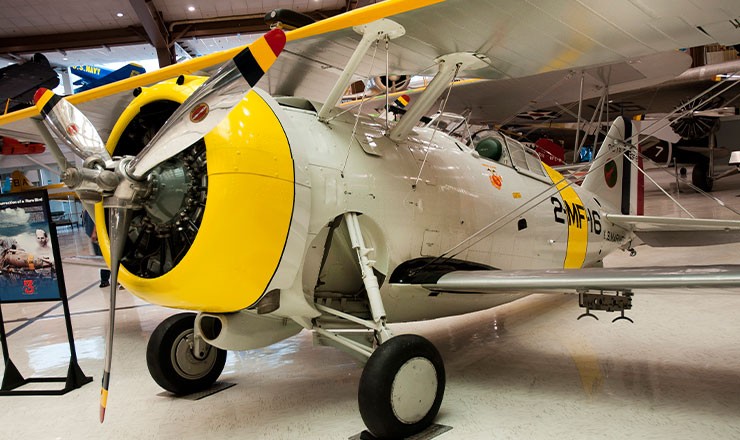 The highly maneuverable Grumman F3F served as the Navy and Marine Corps' premier (and last biplane) fighter of the late 1930s. Used by both the Navy and Marine Corps, the stubby fighter served from 1936 to 1941. Only a handful remain, and the Museum's aircraft is of particular note—in August 1940, then-First Lieutenant Bob Galer, USMC, was forced to ditch this aircraft in the waters off San Diego. Discovered in 1988, the Museum's F3F was recovered and reunited with Galer, who in the interim had become a double ace during World War II, survived being shot down four times, received the Medal of Honor for heroism at Guadalcanal, and retired as a brigadier general. An inspection of the recovered aircraft during its extensive restoration by volunteers and staff at the San Diego Aerospace Museum verified that a valve malfunction had caused the mishap, absolving Galer of what had been presumed to be pilot error.

When the Navy moved to monoplanes in the mid-1930s, the highly maneuverable F3F-2s and -3s became the last carrier-based biplanes. More maneuverable than a monoplane, the biplane fighter was prized as a "dog fighter," but drag prevented it from attaining the high speeds desired for modern warfare.

The XF3F-1 was introduced in 1935 as a follow-on to the F2F-1. Powered by the R-1535-84 Twin Wasp engine and with a longer fuselage and greater wingspan, the XF3F-1 offered improved aerodynamics, especially related to spin recovery, and a larger cockpit. Later, to further improve spin recovery, a ventral strake was fitted. By August 1936, 54 of the new F3F-1s had been delivered, going to Fighting Squadron (VF) 5B aboard USS Ranger (CV-4) and VF-6B in USS Saratoga (CV-3). The two squadrons, eventually renamed VF-4 and VF-3 respectively, retained their F3F-1s until 1940.

In July 1936, the first XF3F-2 prototype was ordered by the Navy, and tested in 1937. A major change was installation of the 950 horsepower Wright R-1820-22 engine, improving performance and changing the contours of the engine cowling. In March 1937, the Navy ordered 81 F3F-2s, assigning them to VF-6 aboard USS Enterprise (CV-6) and Marine squadrons VMF-1 and VMF-2 in 1938. Finally, the Navy purchased 27 F3F-3s, fitted with uprated Cyclone engines. They were assigned to VF-5 aboard USS Yorktown (CV-5) but remained in front line service for only a year.

The F3F-2 on display last flew on 29 August 1940, when then-First Lieutenant Bob Galer was qualifying aboard USS Saratoga (CV-3). A malfunction forced him to ditch his aircraft in the waters off San Diego. Discovered and pulled from the Pacific in 1988, the bird was carefully restored by volunteers and staff at the San Diego Aerospace Museum and retains its markings as a VMF-2 aircraft. A Medal of Honor recipient during World War II, Bob Galer become a double ace at Guadalcanal and eventually retired as a brigadier general.