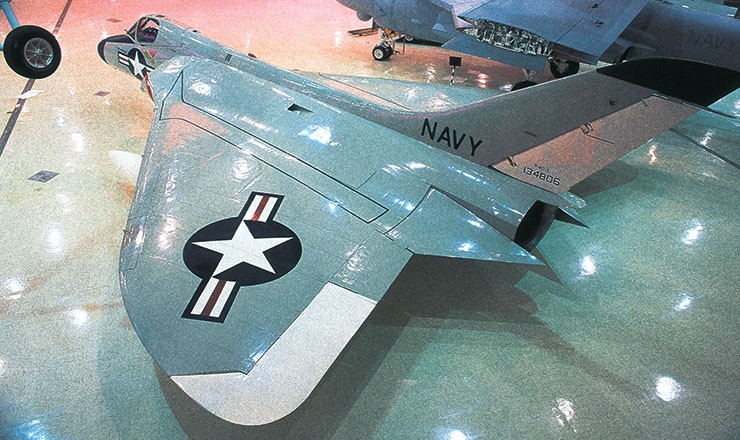 The F4D Skyray emerged from a study of delta-wing technology in aviation design. Built as a high-speed, high-altitude interceptor, the F4D holds the distinction of being the first carrier aircraft to hold world speed and climb records. The Skyray equipped All-Weather Fighter Squadron (VF(AW)) 3 during the late-1950s, the sole Navy squadron assigned to the North American Air Defense Command (NORAD).

Appropriately nicknamed given the rounded stingray-like shape of its wings, the F4D Skyray emerged from a 1947 Navy-initiated design study for an aircraft incorporating delta wing technology. Though in final form the aircraft did not feature a true delta wing, the projected performance of the aircraft, particularly a speed over Mach 1.0 and time-to-climb of over 18,000 feet per minute, impressed the Navy and resulted in a contract for two prototypes. Making its maiden flight on 23 January 1951, the aircraft entered squadron service in 1956. Early test flights displayed the Skyray's phenomenal performance capabilities and it became the first carrier aircraft to hold the absolute world's speed record by achieving a mark of 752.943 mph over a three-kilometer course in October 1953. Over the course of two days in 1958, the aircraft also established five world time-to-climb records.

With the Cold War threat of nuclear attack by Soviet bombers, the performance capabilities of the Skyray and its arsenal of 20mm cannon and AIM-9 Sidewinder missiles made it an attractive candidate for service in the North American Air Defense Command (NORAD). All-Weather Fighter Squadron (VF(AW)) 3 became the only Navy squadron assigned to this predominantly Air Force command, winning an award as NORAD's top squadron two consecutive years. Douglas Aircraft Company delivered a total of 420 F4Ds and at the height of its service the Skyray equipped seventeen front line Navy and Marine Corps squadrons. The F4D production run ended in 1958, and the aircraft was phased out of service in 1964.

Accepted by the Navy in July 1956, the Museum's F4D-1 (Bureau Number 134806) entered operational service with Fighter Squadron (VF) 141, and over the course of the ensuing six years it served in five other Navy and Marine Corps fighter squadrons. In 1962 the aircraft was transferred to the Naval Air Test Center at Patuxent River, where it served until 1969. Its final flight was to NAS Pensacola for display in the Museum.