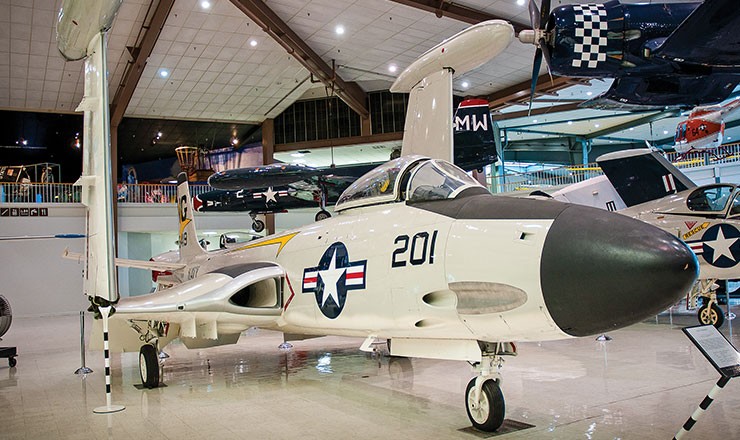 The successor to McDonnell's FH-1 Phantom, the F2H Banshee proved to be a fast and capable high-altitude fighter, making it the aircraft of choice to escort B-29 bombers over Korea. The airplane's official nickname derived from the fact that its engines "screamed like a banshee." To its pilots, however, it was affectionately called the "Banjo."

The F2H Banshee was McDonnell Aircraft Corporation's successor to the FH-1 Phantom, the Navy's first pure jet. Bearing a resemblance to its forbearer, the F2H outpaced it in performance, bettering its maximum speed by more than 50 mph and nearly doubling the range.

Acquisition of the F2H began in August 1948, and the aircraft began entering squadron service the following year. Banshees were capable of cruising on one engine at altitude and were very stable in operations aboard ship. They had two adverse traits, however, in that the tail section was particularly vulnerable to any stress loads beyond the manufacturer's g-load limits, and the landing gear was very fragile, precluding carrier arrested landings above recommended landing weights. Once a pilot dumped excess fuel to achieve maximum permissible weight, he was limited in passes at the deck, not a pleasant situation under adverse weather conditions.

It was the ability to operate at high-altitudes that proved to be the F2H's most valued trait. When the controversy over the Air Force's B-36 bomber erupted during the late-1940s, the high-altitude capability of the F2H was a key point in the Navy's argument against the claimed invincibility of the strategic bomber. That same performance also served well in the skies over Korea, where Banshees were the aircraft of choice for top cover escort of Air Force B-29 raids into North Korea. Advanced versions of the F2H continued to serve as the fleet's primary all-weather carrier fighter until 1959.

Accepted by the Navy on 24 July 1953, the Museum's F2H-4 (Bureau Number 126419) served in many Marine and Navy fighter and all-weather fighter squadrons and made a deployment in the carrier Coral Sea (CVA-43). Stricken from the active naval aircraft inventory in May 1962, it was assigned to the Naval Air Technical Training Center at Jacksonville, Florida, and transferred to the Museum in 1970.