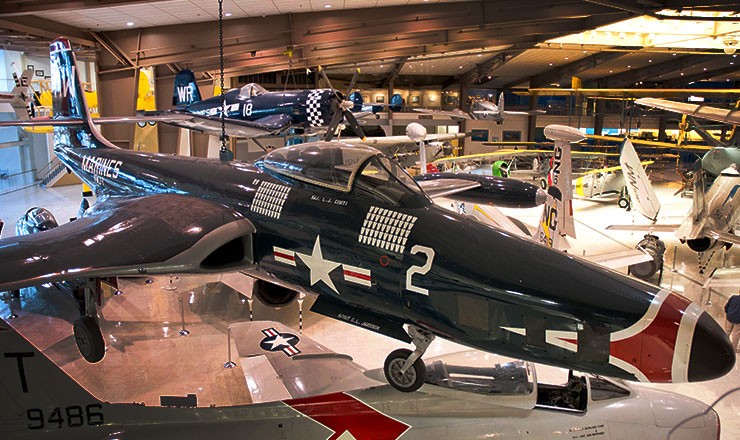 The F2H-2P Photo Banshee was Naval Aviation's most capable photo reconnaissance platform during the Korean War. Having the speed and high-altitude performance of the F2H fighter, the F2H-2P adeptly provided reconnaissance vital to the interdiction campaign. Following its service, the Museum's aircraft was discovered in a playground in Vero Beach, Florida, its fuselage and wings filled with concrete.

Of the 364 production versions of the F2H Banshee (McDonnell Aircraft Corporation's successor to the FH Phantom),  58 were designated F2H-2Ps. Differing from the fighter version of the F2H in the installation of a lengthened nose to house six reconnaissance cameras, the Photo Banshees possessed the speed and high-altitude performance for which the F2H was known.

In the Korean War, where photo reconnaissance was vital in support of the interdiction campaign, the F2H-2P brought increased capability over the F9F-2P Panther. The latter aircraft, employing the K-17 type aerial camera, had to make three passes over a target at 5,000 feet to capture the same coverage as K-38 cameras in a Banshee could get in one pass at an altitude of 15,000 feet. This reduced danger to the aircraft from enemy fire and also reduced the processing work required by photo laboratories ashore and afloat. The nose section housing the cameras in the F2H-2P also incorporated one inch fiberglass matting to help control temperature so that the cameras would function at high altitude. So effective was the F2H-2P that one squadron, Marine Photo Reconnaissance Squadron (VMJ) 1, shot enough exposed film to circle the globe six and a half times. One carrier captain called the airplane "the finest photo plane in service. Its speed, maneuverability, visibility, range, and endurance far exceed any other fighter photo [plane] in service."

The Museum's F2H-2P Banshee spent the years between 1959 and 1988 with its fuselage filled with cement sitting in sand in a playground in Vero Beach, Florida, where children pretended to soar among the clouds in its cockpit. Accessioned by the Museum in 1989, it is restored in the markings of Bureau Number 126673, a VMJ-1 aircraft of the Korean War.