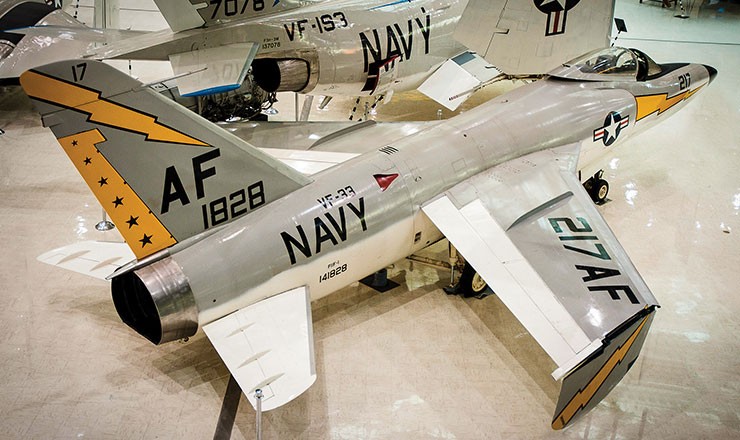 Built as a lightweight fighter, the F11F Tiger was a superior performing aircraft, capable of Mach 1.1. In April 1958, an F11F-1F Super Tiger, of which only two were built, reached an altitude of 76,828 ft., establishing a world record. In a more unusual episode, during a 1956 test flight, a Grumman pilot flying an F11F shot himself down by overtaking his bullets in a diving maneuver. Despite its performance, the Tiger's service life was short, as it coincided with development of the F8U Crusader and F4H Phantom II.

The origins of the F11F Tiger (redesignated F-11 in 1962) can be traced to a 1952 Grumman effort to modernize the company's F9F-6/7 Cougar. Yet, in final form the aircraft departed sharply from its predecessor. Designed as a lightweight fighter, the development model of the F11F, first flown in July 1954, featured thin swept wings, incorporating spoilers instead of ailerons, coupled with an area-rule (coke-bottle shaped) fuselage design that enabled it to exceed Mach 1. The F11F-1 test trials produced one of the most bizarre flights in aviation history when a Grumman test pilot managed to "shoot himself down" with his own bullets. Firing the guns in a dive, the trajectory of the bullets allowed him to overtake them on his pullout causing an engine flameout and a subsequent forced landing.

Initial production F11Fs were delivered to the Navy in March 1957. In spite of its design performance profile, the Tiger saw limited service, its appearance coinciding with two of the most capable fighters of all time, the F8U Crusader and F4H Phantom II. Such was their capabilities that the F11F-1F Super Tiger, which incorporated a more powerful engine that enabled it to achieve a speed of 1,386.47 mph in level flight and reach a world record altitude of 76,828 feet, did not enter production. Tigers finished their service in the Naval Air Training Command and as demonstration aircraft with the Blue Angels, who flew the F11F during the period 1957-1969.

Delivered to the Navy in April 1958, the Museum's F11F-1 (Bureau Number 141828) served with several squadrons, ashore at Naval Air Station (NAS) Cubi Point, Philippines, and with Training Squadron (VT) 26 before flying with the Blue Angels from 1967 to 1969, the last show seasons in which the team flew the Tiger.