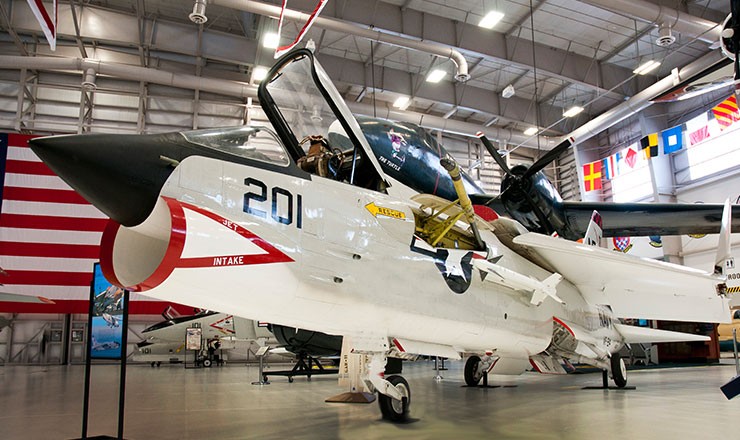 In September 1952 the Navy issued specifications for a new carrier-based fighter with the capability to exceed the speed of sound in routine level flight. Chance-Vought won the bid with its F8U Crusader design (later re-designated the F-8). The F-8 retained 20mm cannon as its primary armament at a time when radar guided missiles were becoming the norm, hence the nickname "Last of the Gunfighters." A superbly performing aircraft, the F-8 was credited with 18 downed enemy aircraft over Vietnam. The RF-8G photo-reconnaissance variants were the last U.S. Navy F-8s retired in 1987.

One of the most capable fighters of the post-World War II era, the F-8 Crusader was a sleek design that featured a gaping jet intake beneath the fuselage and a variable-incidence wing that could be raised to enable the aircraft to land and takeoff at slow speeds while maintaining excellent visibility for the pilot. In an era in which fighter pilots relied increasingly on missiles, the Crusader retained 20mm cannon, prompting its pilots to call it the "Last of the Gunfighters."

Crusaders flew their first combat missions triggering cameras instead of weapons as part of the photo reconnaissance flights over Cuba during the Cuban Missile Crisis in October 1962. F-8s also logged these missions as well as strike and combat air patrol flights throughout the Vietnam War, with Crusader pilots credited with the downing of eighteen enemy MiGs in aerial combat.

Accepted by the Navy on 20 June 1958, the Museum's F-8A (Bureau Number 145347) spent much of its early service career at Naval Air Station (NAS) Cecil Field, Florida, assigned to Fighter Squadron (VF) 174 training East Coast Crusader replacement pilots. In November 1960 it joined VF-11, its first and only front line fighter squadron. While flying with the famed "Red Rippers," the aircraft was part of an unusual deployment in the carrier Franklin D. Roosevelt(CVA-42). Though VF-11 sailed with the carrier from Naval Station Mayport, Florida, on 15 February 1961, the squadron spent most of FDR's cruise shore based at the U.S. naval base at Rota, Spain. There the squadron averaged around 600 flight hours per month while practicing tactics and gunnery. VF-11 also engaged Air Force F-104s from a nearby base in mock dogfights. Returning to Cecil Field in August 1961, the aircraft remained with VF-11 until April 1962, at which time it rejoined VF-174. It was stricken from the Navy inventory in 1971 and arrived at the Museum that same year.