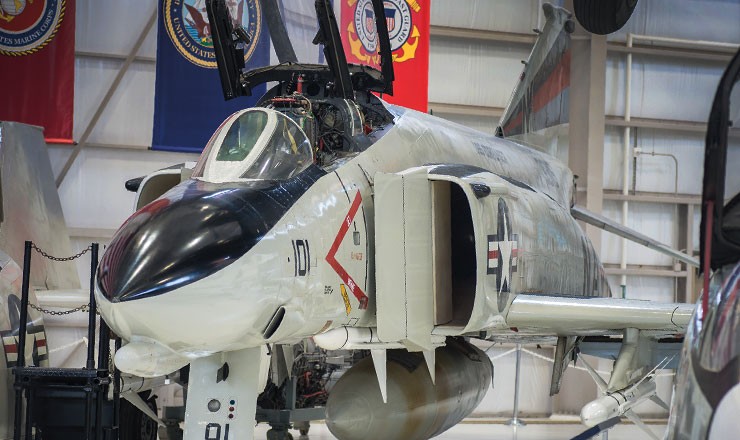 Built as a high-altitude interceptor, the F-4 (F4H) Phantom II quickly demonstrated that it was a special aircraft, establishing over a dozen world speed, altitude, and time-to-climb records. Unique in that it carried no internal cannon, the F-4 relied on radar-guided missiles for offense and required a Radar Intercept Officer (RIO) to operate its advanced sensors and weapons systems. For over two decades the F-4 served as both the Navy and Air Forces' premier air superiority aircraft, and flew with both the Blue Angels and Air Force Thunderbirds. The aircraft on display, Bureau Number 153915, downed a MiG-19 fighter during aerial combat over North Vietnam.

In response to Navy requirements for a high-altitude interceptor to defend carriers with long-range air-to-air missiles against attacking aircraft, McDonnell Aircraft Company delivered the F4H (later redesignated F-4) Phantom II. The aircraft's maiden flight occurred in 1958 with deliveries to Navy and Marine Corps squadrons beginning in 1960. Its performance and versatility eventually attracted the interest of not only the U.S. Air Force, but also the air forces of ten foreign nations, making it one of the most widely-employed aircraft in the history of aviation.

The Phantom II quickly demonstrated that it was a special aircraft, establishing twelve world speed, altitude, and time-to-climb records in the space of just 28 months, the pilots on some of those flights including future astronauts John Young and Richard Gordon. The escalation of the war in Vietnam thrust the F-4 into a tactical environment for which it was not originally designed, yet by war's end it had performed well in air-to-air combat and ground attack missions, with Navy and Marine Corps aviators scoring 36 kills. Under the designation RF-4, the Phantom II also served in the photo reconnaissance role.

McDonnell Douglas built 5,195 Phantom IIs during a production run that lasted from 1958 to 1979, making it second only to the MiG-21 in numbers produced. The only aircraft flown concurrently by the Navy and Air Force flight demonstration teams, the last F-4s flying in Naval Aviation retired from Marine Fighter Attack Squadron (VMFA) 112, a Reserve squadron, in January 1992, 31 years after the aircraft was first delivered to the fleet.

The F-4N Phantom II (Bureau Number 153915) on display is painted in the markings of its final squadron, Fighter Squadron (VF) 154 operating from the carrier Midway (CV-41). While serving on board the same carrier in VF-161 during 1972, the aircraft downed a MiG-19 fighter during aerial combat over North Vietnam. The crew of the aircraft during this flight was Lieutenants Patrick Arwood and James Bell.