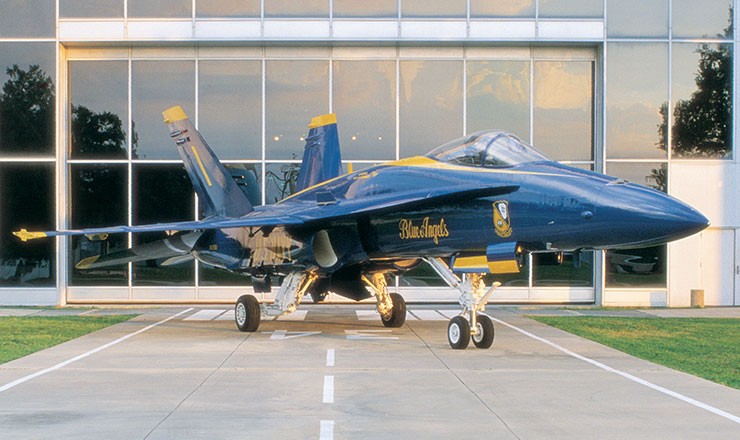 A multi-mission aircraft designed to replace the F-4 Phantom II and A-7 Corsair II, the F/A-18 Hornet became the front line naval strike fighter shortly after fleet introduction in the mid-1980s. Equally at home in air-to-air or air-to-ground missions, the aircraft is highly maneuverable and instrumented to optimize single pilot control of numerous weapons systems. This F/A-18A Hornet (Bureau Number 161959) is in the markings of the Blue Angels Navy Flight Demonstration Squadron to which it was assigned before acquisition by the Museum.

Blue Angels Hornet at a Glance

The F/A-18 Hornet has served the Blue Angels since 1987, the longest tenure of any airplane types assigned to the U.S Navy Flight Demonstration Squadron.

The Hornets assigned to the Blue Angels have reached their limit when it comes to operational flying from aircraft carriers.  To this end, the airplanes that thrill air show audiences around the nation each year are among the longest-serving F/A-18s in the Navy’s inventory, each with extensive history.

The Blue Angel F/A-18s have the nose cannon removed, a smoke-oil tank installed and a spring installed on the stick which applies pressure for better formation and inverted flying. Otherwise, the aircraft that the squadron flies are the same as those in the fleet.

F/A-18A Hornet (Bureau Number 161959) entered service in August 1984, with initial assignment to Air Evaluation Squadrons (VX) 4 and 5 for operational evaluation.  In October 1984, it joined Strike Fighter Squadron (VFA) 113.  During the airplane’s service with the “Stingers,” the squadron joined VFA-25 in making the first operational deployment of the F/A-18 Hornet during a cruise in the carrier Constellation (CV 64).  During a subsequent cruise, VFA-113 patrolled the skies over the Strait of Hormuz during Operation Earnest Will, the escort of reflagged Kuwaiti tankers through the Gulf of Oman and Persian Gulf.  In 1989, Bureau Number 161959 was reassigned to VFA-203, a Naval Reserve squadron based at Naval Air Station (NAS) Cecil Field, Florida.  The airplane flew with the “Blue Dolphins,” until 1997 when it was assigned to the Blue Angels.  It flew with the Navy Flight Demonstration Squadron until 2010.  It was accessioned into the National Naval Aviation Museum Collection in 2011 and is displayed in the markings of Blue Angels, whose home base is NAS Pensacola.

A number of aircraft in naval aviation history have possessed the versatility to provide true multi-mission capabilities, among them the F6F Hellcat and F4U Corsairs of World War II and the venerable F-4 Phantom II.  In 1974, in the aftermath of the Vietnam War, the Navy sought development of a lightweight, low coast multi-mission aircraft capable of performing air-to-air and air-to-ground missions.  Before development of a new aircraft could commence, Congress directed the Navy to investigate two aircraft designs then competing to be a the new lightweight fighter for the U.S. Air Force, which ultimately selected the YF-16 design that in production was called the F-16 Falcon.  The Navy eventually selected the YF-17, which was more adaptable to the rigorous structural requirements for carrier operations, with McDonnell Douglas and Northrop teaming up to develop it as a strike-fighter that was eventually designated the F/A-18 Hornet.

When introduced, the Hornet brought significant changes for naval aviators accustomed to climbing into cockpits with an array of gauges and dials.  Instead, designers reduced conventional instrumentation in favor of a heads up display (HUD) displaying critical information so that the pilot would not be distracted by repeatedly having to look down at various controls.  Additionally, critical switches used in combat actions were all located either on the throttle or the control stick.

Maintainability very much guided the design of the F/A-18 Hornet, with squadron maintenance personnel able to change out engines in just 20 minutes and sophisticated radar equipment positioned on a track that allowed it to rolled out quickly for inspection and repairs.

Deliveries of the F/A-18 Hornet began in May 1980, with assignment to VFA-125, the Navy’s Fleet Replacement Squadron for training Hornet flight crews.  Marine Fighter Attack Squadron (VMFA) 314 became the first operational squadron to receive the F/A-18, accepting delivery of its first Hornets on January 7, 1983.  The first carrier deployment of the F/A-18 Hornet occurred in 1985 when VFA-25 and VFA-113 completed a cruise as part of CVW-14 in the carrier Constellation (CV 64).

The night-attack version of the Hornet, the two-seat F/A-18D, entered operational service with the Marine Corps in 1990.

Fourteen squadrons equipped with the F/A-18 Hornet logged combat missions against Iraqi forces during Operation Desert Storm.  Two pilots from VFA-81 off the carrier Saratoga (CV 60) demonstrated the F/A-18 Hornet’s inherent versatility on January 17, 1991.  While en route to attack a ground target, Lieutenant Commander Mark Fox and Lieutenant Nick Mongillo engaged two Iraqi MiG-21 fighters approaching the target area. After shooting them down with air-to-air missiles, the pair destroyed their assigned targets with 2,000-lb. bombs.  Another F/A-18 pilot flew fighter escort for attacking A-6 Intruder aircraft, knocking out an enemy radar with a high-speed anti-radiation missile (HARM) and then delivering bombs on a target at an enemy airfield, his single airplane performing three distinct missions on one flight.

F/A-18 Hornets flew missions against Iraq as part of Operation Desert Fox in December 1998, and have been mainstays in combat actions over Iraq and Afghanistan during the Global War on Terror.