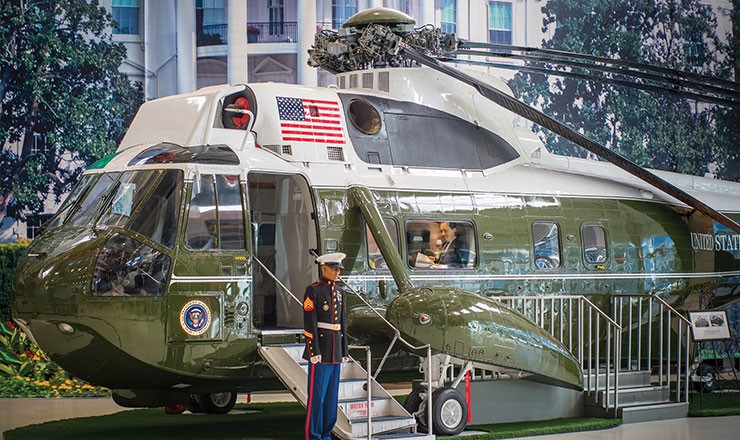 Modified from a Sikorsky H-3 Sea King antisubmarine helicopter, this VH-3 flew Presidents Nixon and Ford during the 1970s as part of the Marine Corps' mission to provide short-range helicopter transportation to the President. It was restored by the Sabreliner Corporation and placed on display in August 2011.

Though hunting enemy submarines was the prime reason for its procurement, the Sea King's outstanding performance capabilities prompted its adaptation to other missions. One of these was executive transport, for which the Navy procured eight VH-3A versions of the Sea King. Luxuriously outfitted with carpeting, radio telephones, a wet bar, and toilet facility, the aircraft also were extensively soundproofed and armored, with special protection provided for the aircraft's electrical system and flight controls. Self-sealing fuel tanks and energy-absorbing landing gear and seats improved crash survivability. As executive transports, the aircraft most famously served in the Executive Flight Detachment of Marine Helicopter Squadron (HMX) 1, transporting the President of the United States and other high-ranking government officials.

In 1966, the Museum's aircraft (Bureau Number 150613) was assigned to HMX-1 at Quantico, Virginia, but not until January 1972 did it begin its service with the squadron's Executive Flight Detachment. It flew in this capacity, carrying the call sign "Marine One" when the Commander-in-Chief was on board, until 1975, which included parts of the administrations of Presidents Richard M. Nixon and Gerald R. Ford. Transferred to the Navy, the aircraft finished its service with Helicopter Combat Support Squadron (HC) 2 in 2003, at which time it was transferred to the Museum.