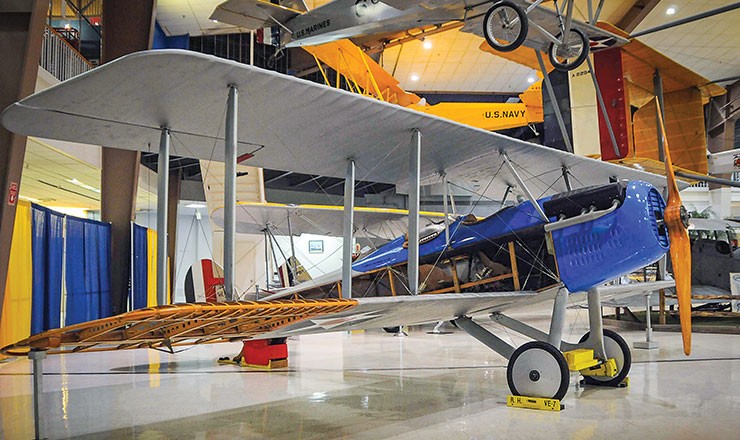 Built by the Vought Aircraft Heritage Foundation, this aircraft is a replica of the VE-7 "Bluebird," so named because of its colorful paint scheme. The Bluebird was not only the first VE-7 produced by Lewis and Vought Corporation, precursor to the company that built the famed F4U Corsair, it was the first airplane ever built by the company. Less colorfully painted in Navy service, the VE-7 featured a top speed of 117 miles per hour and a total of 128 examples were delivered to the Navy, with some built by the Naval Aircraft Factory in Philadelhpia using Lewis and Vought plans. They served from 1920 to 1928.

Like many naval designs of the era, they could be fitted with wheels or floats to enable operations from water, land, or carrier flight deck. The VE-7 participated in signature events of Naval Aviation history and development during the 1920s, making the first ever take-off from a U.S. carrier, Langley (CV-1), on 17 October 1922, serving as the platform for tests of compressed air catapults for floatplane operations from battleships and cruisers, and staging early experiments in the development of the tactic of dive-bombing. They also competed in the popular air races of the day.