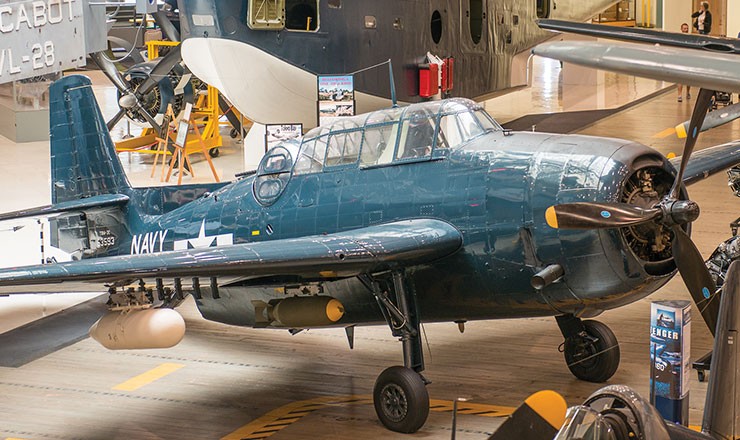 Though its introduction to combat at the Battle of Midway was not a promising start (five of the six Grumman TBF-1 Avengers assigned to Torpedo Squadron (VT) 8 were shot down, and the lone survivor was heavily damaged), the TBF became the Navy's standard torpedo bomber throughout the war. It served in other roles as well, including glide bombing in close air support, reconnaissance, and light transport. In all, 9,836 Avengers were built, 7,546 of which were turned out by General Motors Eastern Aircraft Division and designated TBMs.

Ordered by the Navy in April 1940, the XTBF-1 was Grumman's first attempt to build a torpedo bomber as a replacement for the already obsolete Douglas TBD Devastator. The Navy placed an order for 286 of the aircraft in December 1940, and the first flight of the XTBF-1 took place on 1 August 1941.

By December of that year, a second prototype had been accepted and in January 1942 the first production TBF-1 joined the fleet. During the first six months of 1942, 145 TBFs were delivered. Six of them were assigned to Torpedo Squadron (VT) 8 for evaluation. Missing the movement of the squadron aboard the carrier Hornet (CV-8), the six aircraft were ferried to Midway from Pearl Harbor, in time to take part in the Midway battle. Operating from land, the aircraft attacked the Japanese fleet but were mauled by enemy fighters. Five were shot down, and the surviving aircraft was badly damaged with one crew member dead and one wounded. The heavily damaged TBF-1 provided valuable information that would be the source of improvements to its combat survivability.

With ever increasing demands for aircraft, and faced with the Navy's push for a replacement for the F4F Wildcat fighter, Grumman concentrated on development of the XF6F Hellcat, farming out much of the F4F and TBF production to General Motors' newly-formed Eastern Aircraft Division. The GM plants in New York, New Jersey and Maryland took over production, redesignating the Wildcat and newly-named Avenger FM and TBM respectively. By war's end, Eastern Aircraft's plants had turned out 18,000 aircraft, 7,546 of which were TBMs. By 1944 Grumman had produced 2,290 TBFs before production ended, bringing the total Avengers produced to 9,836 (2,882 TBM-1s and 4,664 TBM-3s). Great Britain and New Zealand received 921 of the aircraft. In keeping with their naming of torpedo planes for fish, the British named the TBF/TBM the "Tarpon."