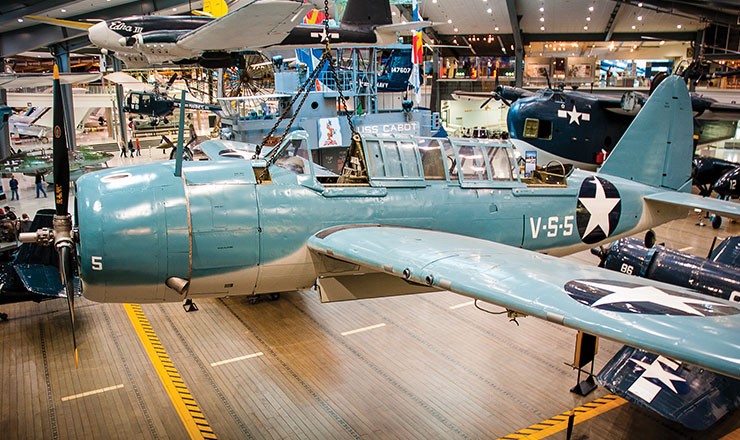 Overweight, underpowered, and lacking maneuverability, the Brewster SB2A Buccaneer was a classic failure. Seeking a new dive bomber, the Navy had ordered a prototype of Brewster's Model 340 in April 1939, but its first flight did not occur until June 1941, though full production already had begun with the sale of the 750 aircraft to Britain, and 162 to the Dutch. The aircraft were found to be unsatisfactory and were never used in combat, but instead became trainers, target tugs and ground maintenance trainers.

The Brewster Aeronautical Corporation's first aircraft for the Navy was the prototype XSBA-1 dive bomber, introduced in 1937. Redesigned shortly thereafter to double its ordnance load from 500 to 1,000 lb., the resulting aircraft had increased overall dimensions and featured a 1,700 horsepower Wright Cyclone R-2600 twin-row radial engine. In April 1939, the Navy ordered the prototype, designated the XSB2A-1 and later nicknamed the Buccaneer.

Its first flight did not occur until June 1941, though Brewster had succeeded in contracting for 750 aircraft for the British and landing a contract with the Dutch for 162 of the type. Only too late did the British discover that the aircraft was totally inadequate, and as a result they were never used in combat, but instead flew as target tugs, were used as ground maintenance trainers or were scrapped outright.

In 1943, the Navy began accepting 80 modified SB2A-2s, and repossessed the 162 Dutch aircraft after the fall of the Netherlands, designating those aircraft SB2A-4s. Between 1943 and early 1944, the Navy accepted 140 additional airplanes, 60 of which were SB2A-3s, modified with folding wings and tailhooks for carrier operations. As with the British, the Navy found the aircraft unsatisfactory. It proved overweight for its R-2600 engine and was not very maneuverable. It lacked ruggedness, incurring many stress problems that made it unreliable, even as a trainer. Thus, the airplane was relegated to lesser training roles and used to tow targets. The Marine Corps, needing an aircraft for night fighter training, took some of the SB2A-3s and assigned them to two squadrons at Naval Air Station (NAS) Vero Beach, Florida.

Some of the later SB2As went directly from the assembly line to the scrap heap. None saw combat. Fraught with low skilled labor, strikes and suspected sabotage, Brewster was seized by the Navy in 1942, but later, owner Jim Work regained the company only to be sued for $10 million for various misdeeds. Brewster also was given a contract to produce the highly successful Vought F4U Corsair under license as the F3A, but that turned out badly due to unsatisfactory work. Brewster closed its doors in 1946.