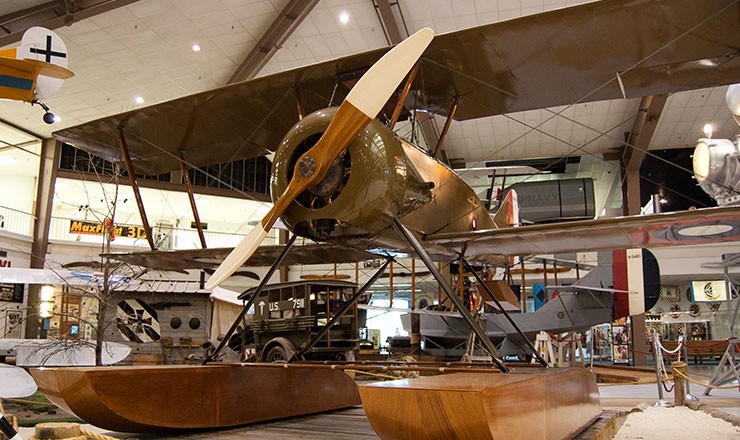 Used as a primary trainer during World War I, the Thomas-Morse S-4B/C Scout was the aircraft in which David Ingalls received training at Naval Air Station (NAS) Dunkirk before joining a Royal Air Force squadron, where he became the Navy's only ace in World War I with six aerial victories. The Museum's example is configured as the S-5 floatplane variant of the aircraft.

With war clouds on the horizon for the United States in 1917, the Army Signal Corps realized the need for a trainer to prepare its pilots to fly more advanced fighter aircraft in service over the trenches of Western Europe. The service turned to the Thomas-Morse Aircraft Company's S-4B/C Scout, known to a generation of pilots as the "Tommy." Though the Army was the recipient of most of the production aircraft, the Navy procured fourteen examples for use as combat trainers. It was in an S-4C that Lieutenant Junior Grade David Ingalls received training at Naval Air Station (NAS) Dunkirk before joining a Royal Air Force squadron, where he became the Navy's only ace in World War I with six aerial victories.

In addition, Thomas-Morse delivered six S-5s, seaplane versions of the S-4B, to the Navy in 1917 for use as a primary trainer. They flew mainly from Dinner Key near NAS Miami, Florida, their ungainly wooden floats having to be emptied of water by sailors on the ground after each flight. Though the trusty "Tommy" disappeared from military airfields in the years following World War I, it remained in the public eye on the big screen, flying combat sequences in such Hollywood war movies as Hell's Angels and Dawn Patrol.

The Museum's example of the Thomas-Morse S-4C was acquired in 1984. It is painted in the markings of Bureau Number A-5858, one of four examples procured by the Navy for fighter pilot training following the end of World War I. In 2000, a pair of twin floats was added in place of conventional landing gear, thus depicting the Thomas-Morse S-5 seaplane (converted from the S-4B) that was used in limited numbers by the Navy as a primary trainer during the Great War.