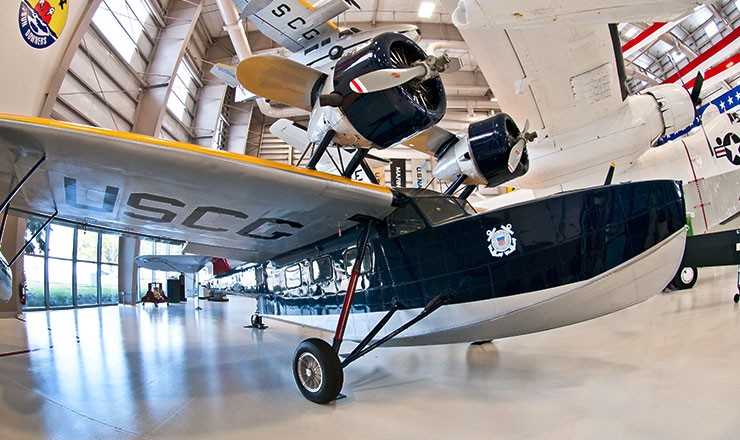 Acquired by the Navy and Coast Guard as a transport and search and rescue aircraft, RD Dolphins served throughout the 1930s and in a limited role as patrol aircraft during World War II. Two open sea rescues made by Coast Guard RDs resulted in the first awards of the Distinguished Flying Cross ever made to Coast Guard Aviators. The RD on display in the Museum, last known of its kind, was originally purchased by William E. Boeing, the founder of the Boeing Airplane Company, in 1934.

Originally designed as a flying yacht capable of operating only from water, Douglas's RD Dolphin ultimately entered production with amphibious capability in 1931. The Navy and Coast Guard took interest and ordered several as transport and search and rescue aircraft. Only 58 Dolphins were built, and between 1931 and 1935, the Coast Guard took delivery of 13 of them, four of which operated into World War II.

Though one was used as an administrative aircraft by the Secretary of the Treasury, the majority of the Coast Guard RDs spent their service flying search and rescue missions, including two notable open sea rescues of fishermen in the 1930s for which the pilots received the first Distinguished Flying Crosses ever awarded to Coast Guard Aviators. Dolphins also assisted in rescue and recovery operations in the wake of the 1935 hurricane that decimated the Florida Keys. Those aircraft that remained operational during World War II flew security patrols along the coastline of the United States. Interestingly, all of the RDs assigned to the Coast Guard bore the names of stars such as Rigel and Vega.

The Museum's RD-4 Dolphin is the last known surviving example of the venerable amphibian. It was originally purchased in 1934 by William E. Boeing, founder of Boeing Airplane Company. Dr. Colgate W. Darden, III, eventually acquired the plane and, after flying it for many years, donated it to the Museum. Though the RD-4 on display never flew in the Coast Guard, it is painted in that service's markings to commemorate an airplane that greatly advanced lifesaving capabilities during the 1930s