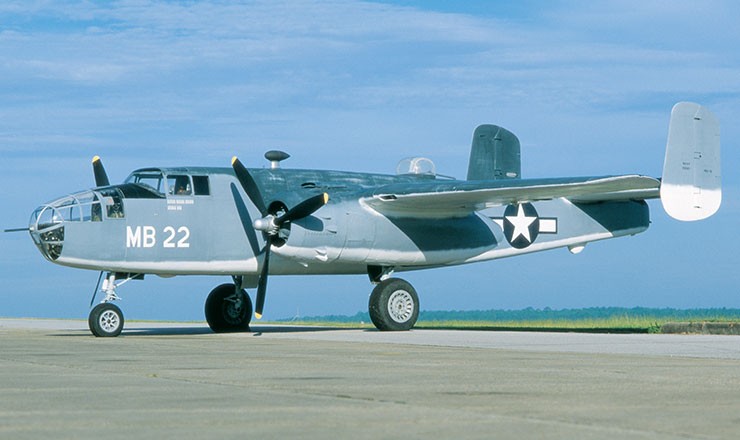 The B-25 Mitchell's introduction to Naval Aviation came under unique circumstances when 16 of the bombers under the command of Army Air Forces Lieutenant Colonel James H. Doolittle launched from the aircraft carrier USS Hornet (CV-8) for a raid on Tokyo on 18 April 1942. Just two months later, the Navy contracted for a percentage of North American's B-25 production. Designated PBJs, the aircraft became a mainstay in Marine Corps medium bombing squadrons. Marine Bombing Squadron (VMB) 413 flew the aircraft's first sorties in the Solomon Islands, and subsequent flights included daylight bombing over Rabaul, as well as night heckling missions. Navy use of the PBJ was mainly experimental in nature, including catapult and arresting gear trials aboard the carrier USS Shangri-La (CV-38) in November 1944. The PBJ on display is painted in the markings of an aircraft assigned to VMB–423 that crashed on the island of Vanuatu on 22 April 1944.