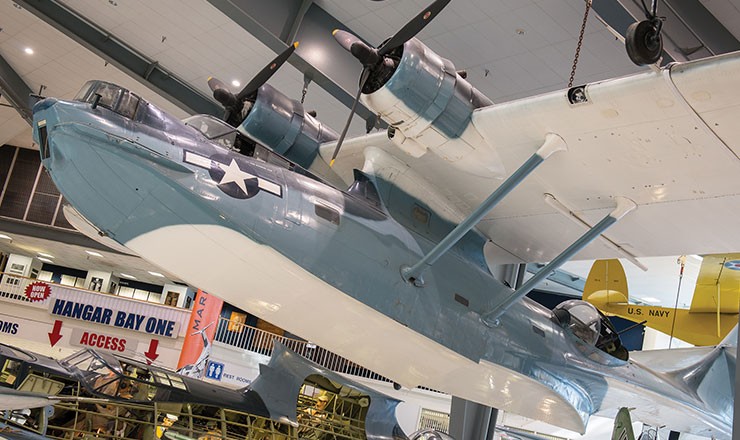 One of the most recognized aircraft in the world, the Consolidated PBY Catalina not only served in the U.S. Navy, but also with the air arms of Britain, Australia, New Zealand, Canada, the Netherlands and the Soviet Union. The PBY was involved in almost every major operation in World War II, and figured significantly in defeating the U-boat menace in the Atlantic. The suspended PBY-5 on display is the only pure seaplane variant in existence; other surviving Catalinas are PBY-5A amphibious versions.

In response to an October 1933 order from the Navy for a monoplane patrol aircraft, Isaac Laddon of Consolidated Aircraft designed the all metal Model 28 with a number of unique features, including a parasol-mounted wing incorporating internal bracing to reduce the need for external struts, and retractable stabilizing floats that folded upward to become wingtips in flight.

The overall effect was an aerodynamically clean aircraft far superior to previous flying boat designs. Powered by two Pratt & Whitney R-1830-58 engines of 825 horsepower each, the aircraft, with a crew of seven to ten, was armed with three 0.30-in. machine guns, and could carry 2,000 lb. of bombs. Designated the XP3Y-1, the aircraft made its first flight on 15 March 1935. Early trials proved quite successful and the Navy ordered 60 of the aircraft in June 1935. Because it could carry a substantial bomb load, the aircraft was redesignated a patrol bomber. Fitted with more powerful R-1830-64 engines and incorporating modifications to the fin and rudder, the XPBY-1 was delivered to Patrol Squadron (VP) 11F in October 1936.

Improved PBY-2, PBY-3 and PBY-4 models appeared between 1936 and 1939, each incorporating updated R-1830 engines and other minor modifications. The PBY-5 was introduced in September 1940, just in time to take part in the Neutrality Patrol in the Western Atlantic. By the end of 1941, the Navy had 16 squadrons operating PBY-5s. At the same time, Consolidated introduced the amphibious PBY-5A. By then, the name Catalina, originated by the RAF, was adopted.

Production of the aircraft took place in Buffalo, San Diego and New Orleans. Boeing of Canada built 362 PBYs, and Vickers of Canada produced another 240 Catalinas and similar Cansos, the latter destined for service with the RAF, RCAF, RAAF and RNZAF. The New Orleans factory, besides providing aircraft for the Navy, also provided 75 aircraft to the USAAF and 48 to Russia. Coast Guard service commenced in 1940.

Later models equipped with radar and Magnetic Anomaly Detection (MAD) equipment operated throughout the Atlantic, Mediterranean and Pacific. Not only did the Catalina figure significantly in disrupting U-boat operations, it also proved ideal in long-range reconnaissance (PBYs located the Japanese fleet at Midway), night anti-shipping (Black Cats) and air-sea rescue (Dumbo). The venerable Catalina served in every theater of the war. In all, 3,276 PBYs were built. The PBY-5 on display (Bureau Number 08317) is the only pure seaplane version of the aircraft in existence and is on loan from the Smithsonian National Air and Space Museum.