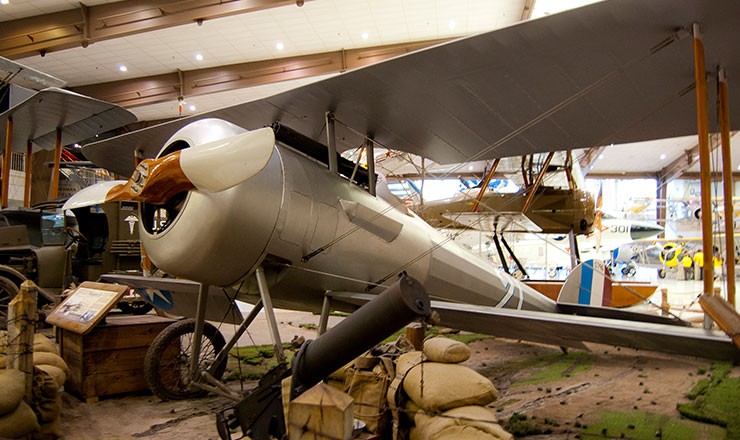 The type aircraft used by American ace Eddie Rickenbacker, the Nieuport 28 may not have been the most famous French fighter, but it was a capable aircraft in the right hands. The U.S. Navy acquired the Nieuport along with a number of others (including the Hanriot HD-1, Sopwith Camel and Sopwith 1½ Strutter) after the war as part of its test program to launch aircraft from wooden decks built on the gun turrets of battleships.

An upgraded version of the Nieuport 17, the Nieuport 28 entered combat service in June 1917 and served alongside the SPAD over the trenches of the Western Front. Despite its increased maneuverability, the Nieuport 28 retained the same problems as its predecessor in that the wing surfaces tended to shed in prolonged power dives and the airplane was very unforgiving of pilot error. Thus, the French Flying Service operated only a limited number of them. American pilots of the Allied Expeditionary Force employed the aircraft with great skill, however, with leading ace Eddie Rickenbacker scoring many of his 26 kills in the aircraft. Despite these early successes, the wing fabric problems remained and the Americans eventually followed their French counterparts in obtaining the sturdier SPAD fighters.

The U.S. Navy employed the Nieuport 28 not in combat, but in the postwar evaluation of operating aircraft from ships. In 1919 the sea service acquired twelve examples for service with the fleet as part of the "shipboard fighter" concept. The relatively inexpensive war surplus aircraft proved ideal for the operations in which the aircraft flew from platforms built on the forward turrets of battleships. After completing their flights, they either landed ashore or ditched at sea, inflating flotation bags affixed to the wings to prevent the airplane from sinking. They were then returned to the ship by boat.