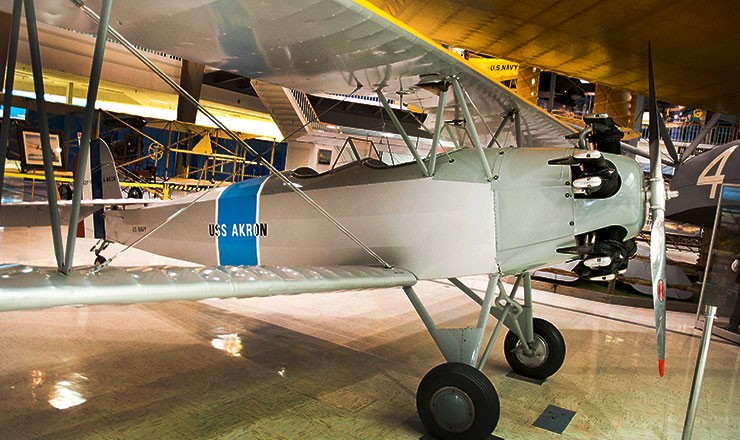 Six specially-equipped Consolidated Model 14 Husky Junior two-seat trainers were purchased by the Navy in 1930, and assigned to the rigid airships Los Angeles (ZR-3) and Akron (ZRS-4). Rigged with skyhooks, the trainers were used to familiarize pilots with in-flight launching and recovery from the huge airships' "trapeze" gear, preparing them for operational employment flying Curtiss' F9C Sparrowhawk fighter. After Los Angeles was retired in 1932, and Akroncrashed in 1933, The N2Ys were assigned to Macon (ZRS-5).

In 1929, the Navy tested Consolidated's civilian trainer, the Husky Junior, a two-seat primary trainer. The aircraft, designated N2Y-1, was selected as a training platform to prepare pilots for in-flight launch and recovery operations from the Navy's huge rigid airships. Equipped with hangar space for six aircraft, the airships would carry their own protection in the form of specially designed Curtiss F9C Sparrowhawk fighters.

After training in the N2Ys, fixed wing pilots assigned to duty with the airships operated the small Curtiss F9C fighter from the airships' large hangars. After a time, the operations became so routine that the Sparrowhawks had their fixed landing gear removed for better performance. In April 1933, Akron crashed during a storm over the Atlantic, taking with it the Navy's first Chief of the Bureau of Aeronautics and airship advocate, Rear Admiral William Moffett. In the meantime, rapid advances in shipboard operations, and vulnerability in weather and questionable survivability of the airship in war, directed tight budgets to more promising areas in Naval Aviation. Nonetheless, the unique experiment, mating fixed wing aircraft with a rigid airship, marked a fascinating period in Naval Aviation history.