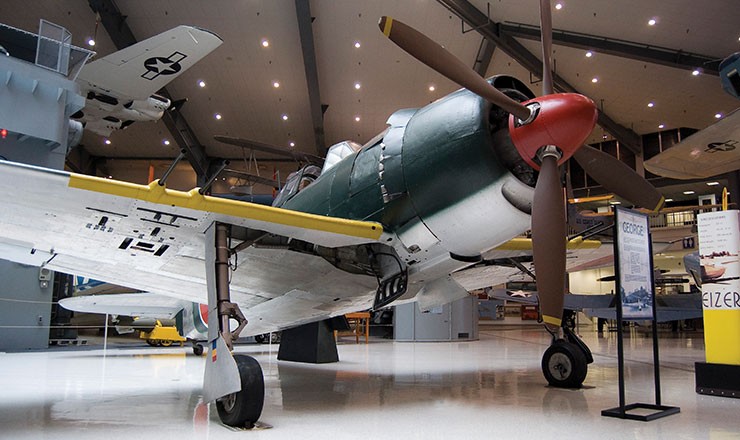 Produced too late in World War II to mount a challenge to U.S. air superiority, the N1K2, code named "George" by the Allies, is an example of significant Japanese advances in technology during the war when compared to the 1940 design of the famous A6M Zero. One of four surviving examples, the Shiden Kai (Violet Lightning Modified) on display served with the 343 Kokutai (air group) led by the famous Captain Minoru Genda and manned by Japanese aces. Of interest is the Haiku inscribed on the fuselage by an unknown Japanese pilot.

In December 1941, Kawanishi's engineering team neared completion of the designs for its N1K1 floatplane fighter. They recognized, however, that it held potential for developing a high-performance land-based fighter. Initially, with the exception of substituting the floats with retractable landing gear, the conversion involved few modifications. The new design was powered by an 18-cylinder Nakajima Homare radial, expected to deliver 2,000 horsepower, with an 11 ft. four-blade propeller, greatly increasing performance. The large propeller, combined with the mid-fuselage wing, dictated long undercarriage legs, the arrangement resulting in landing gear problems. A unique design feature was an automatic flap system used not only for landing, but also aiding in slow-speed air combat maneuvering.

Built at Kawanishi's Naruo plant, the fighter, designated Model X-1, made its first flight on 27 December 1942. It was armed with two fuselage-mounted 7.7mm machine guns and two Type 99 20mm wing cannon. From the start, flight testing was interrupted by both engine and landing gear problems. Additionally, the aircraft failed to meet the maximum speed requirement (357 mph vice 403 mph), but impressive maneuverability and range made it a worthy adversary for Allied fighters. The Imperial Japanese Navy (IJN) ordered emphasis given to improving what was to become the N1K2-J. In December 1943, the improved model flew for the first time. The new version had the wing lowered from mid-wing, thus shortening the landing gear. In addition, the fuselage and tail surfaces were redesigned, and the new Homare 21 engine installed. Armament consisted of four 20mm cannon in the wings.

The Shiden Kai, code-named George by the Allies, proved a worthy opponent. In February 1945, Warrant Officer Kinsuke Muto of the 343d Kokutai single-handedly attacked twelve F6F Hellcats, downing four and forcing the others to break contact. Unfortunately for the Japanese, the N1K2-J arrived too late in the war to make a difference. Bombings by B-29 Superfortresses in the war's later months further eroded the aircraft's effectiveness by destroying aircraft and engine plants, allowing only 1,435 of the new fighters to be produced before war's end, most of them used in the defense of the Home Islands.