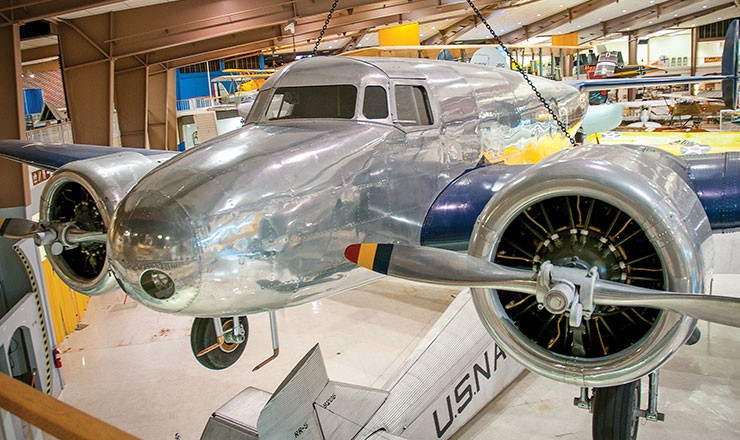 The Lockheed 10 Electra was designed in the early 1930s as a commercial transport to compete with Douglas' DC-2 and Boeing*#39;s Model 247. The decision to conduct wind tunnel tests for the aircraft at the University of Michigan proved fortuitous for Lockheed. A young graduate student participating in the testing noted the aircraft's lack of stability in its original single-tail configuration, eventually convincing Lockheed's chief engineer that a twin-tail configuration would solve the problem. That student was Kelly Johnson, who eventually rose to lead Lockheed's famous "Skunk Works," where he was instrumental in the design of such aircraft as the U-2 and the SR-71 Blackbird.

The first flight of the Lockheed 10A took place on 23 February 1934. In 1936, two Electras, a Model 10A for the Navy and a Model 10B for the Coast Guard, were purchased. These were designated the R2O and R3O respectively. The Navy aircraft was assigned to duty as personal transport for the Secretary of the Navy, and the Coast Guard aircraft was for the use of the Secretary of the Treasury. Popular in commercial aviation, the Electra was used by eight U.S. airlines and those in eleven foreign nations. Besides the Navy, Coast Guard and Army Air Corps, seven other foreign military services purchased the aircraft, including the Japanese. A highly modified Model 10E, equipped with extra fuel tanks and long-range communication and navigation equipment, was used by Amelia Earhart on her round-the-world attempt in 1937, the search for her missing plane including the aircraft carrier USS Lexington (CV-2).