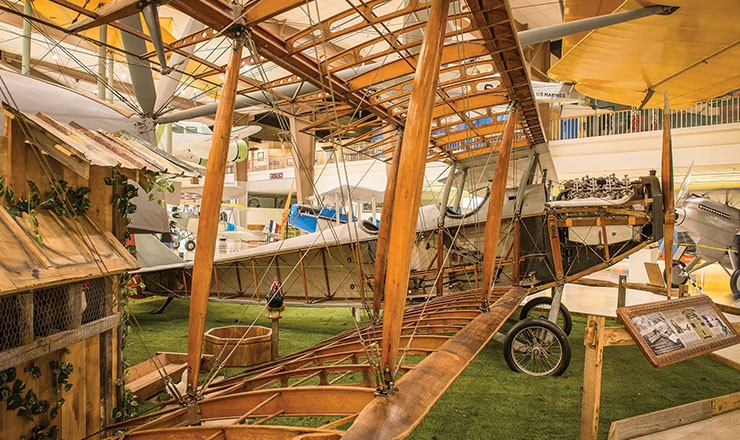 The famous JN-series of Curtiss aircraft made one of the largest impacts on the growth of aviation in the history of heavier-than-air flight. Built in the thousands, the Jenny brought aviation to the masses, being aircraft of choice for early barnstormers and air mail pilots. During World War I, the N-9, a seaplane version of the Jenny, served as Naval Aviation's foremost seaplane trainer, with over 500 procured during the aircraft's service.

The JN-series aircraft achieved widespread fame not because of any outstanding performance in combat or notable flying characteristics, but because of the sheer numbers in which they were produced. All told, over 7,000 examples rolled out of the plants of Curtiss Aeroplane and Motor Company and other manufacturers. Known universally as the Jenny, the aircraft served primarily as a trainer, and estimates are that over 95 percent of all American and Canadian pilots during World War I received some instruction in the aircraft.

Though the Navy relied primarily upon the Curtiss N-9 seaplane for the training of aviators during and immediately following the war, the service did procure 261 examples of the JN, including two fitted with experimental floats and more than ninety airplanes outfitted for use as gunnery trainers. Following World War I, the Jenny participated in experimental flights for the Army and Navy evaluating the feasibility of operating aircraft from airships. However, it was in the hands of barnstormers and pilots of the fledgling air mail service that the aircraft became most famous, exposing thousands of Americans to aviation.

The Navy's primary training aircraft from 1917 through the mid-1920s, the N-9 was a familiar sight in the skies over naval air stations from Key West and Pensacola to Hampton Roads, Virginia. Initial versions of the aircraft were underpowered, which, along with the weight of the float beneath the fuselage, made performing aerobatics challenging for student pilots of the day. Nevertheless, the seaplane made a lasting impression on a generation of fliers. "It was something to look up and see the station above me," wrote one fledgling pilot of performing a loop. "When the plane is upside down the engine stops with a putt putt bang bang. Then when going into the dive the motor comes on with a brrrrr." Though the N-9 was designed and initially built by Curtiss Aeroplane and Motor Company, the Burgess Company constructed the majority of the 560 examples procured by the Navy. In addition, during the 1920s personnel at Pensacola used spare parts and engines from wrecked N-9s to construct entirely new airframes for local use.