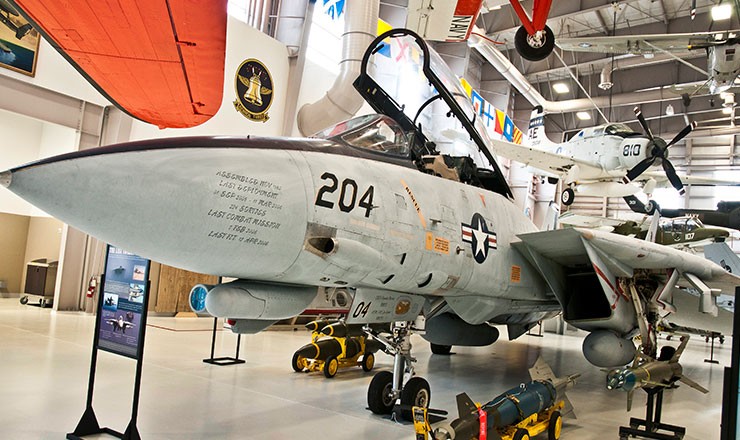 Perhaps the most widely recognized Navy fighter thanks to its starring role in Top Gun, the F-14 Tomcat served as an advanced interceptor and air superiority fighter, capable of attacking six enemy aircraft simultaneously at a range of over 100 miles with the AIM-54 Phoenix missile. The Museum's F-14D, Bureau Number 161159, logged the final combat mission in the long history of the Tomcat, one that concluded when it trapped on the deck of USS Theodore Roosevelt (CVN-71) on 8 February 2006.

It was a failed attempt at standardization that resulted in the design of perhaps the most famous fighter of the modern era. When a Navy version of the U.S. Air Force F-111 failed to meet exacting requirements for a carrier-based fighter, the Navy initiated a design competition for a new air superiority aircraft. The result was a design marvel featuring a unique variable sweep wing—the F-14 Tomcat.

Equipped with a weapon control system that enabled the aircraft's crew to track 24 hostile targets at a range of 195 miles and attack six simultaneously with AIM-54 Phoenix missiles, deliveries to the Navy began in June 1972 with deployment of operational carrier squadrons in 1975. The F-14 made a brief appearance over Vietnam, flying protective patrols for helicopters effecting the final evacuation of American personnel and foreign nationals from Saigon with no opposition from enemy fighters. The Middle East was destined to become the scene of the Tomcat's combat initiation during encounters with Libyan fighters during the 1980s. Upgraded F-14A (plus) and F-14Ds came into service in the late1980s and early 1990s, boasting enhanced avionics and more powerful F110-GE-400 turbofans. The aircraft also proved an outstanding air-to-ground platform employing a capability present from the initial design work, but rarely employed. At peak employment, thirty Navy squadrons operated F-14s. Tomcats flew combat missions during the Gulf War and in missions over Iraq and Afghanistan from 2001 until the F-14's retirement in 2006.

The Museum's F-14D, Bureau Number 161159, logged the final combat mission in the long history of the Tomcat, one that concluded when it trapped on the deck of the carrier Theodore Roosevelt (CVN-71) on 8 February 2006. The aircraft was piloted by Captain William G. Sizemore, II. It was flight delivered to Naval Air Station (NAS) Pensacola, Florida, directly from Fighter Squadron (VF) 213, to which it had been assigned since 1997. Originally accepted by the Navy as an F-14A in December 1980, it was converted to the F-14D configuration in September 1991. The aircraft flew its first combat missions over Afghanistan as part of Operation Enduring Freedom, logging missions from the deck of the carrier Carl Vinson (CVN-70). The last of its 224 combat sorties occurred in the skies over Iraq.