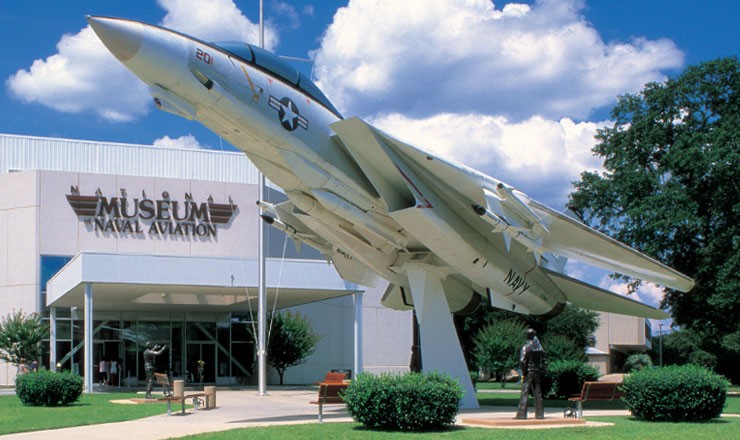 Museum visitors are greeted by an icon of Naval Aviation, Grumman's F-14 Tomcat. Advancements during the Cold War in Soviet long range patrol and bomber aircraft dictated a requirement for a fleet defense fighter that could engage high-altitude bombers from well beyond visual range. The F-14 Tomcat was Grumman's answer. Equipped with long range AIM-54 Phoenix air-to-air missiles, F-14s could engage multiple hostiles over 90 miles away. Needing an interceptor's high speed while carrying this heavy ordnance, Grumman produced the highly effective variable sweep wing of the F-14, enabling it to operate at a wide range of airspeeds.

The Navy's search for an advanced carrier-based air superiority fighter led to evaluation of General Dynamics' F-111B, an aircraft that would promote the Department of Defense's aim of commonality with the Air Force and its F-111A. The F-111B, having been modified to meet Navy mission requirements, was deemed too heavy for carrier operations and the contract was cancelled in April 1968. Subsequently, the Navy inaugurated a new design contest for what was termed the VFX program, the two primary competitors being McDonnell Douglas and Grumman.

While McDonnell Douglas evaluated a navalized version of the F-15, Grumman's Model 303 proposed a variable-geometry, two-seat, twin-engined design built around the Hughes AWG-9 weapons system. Grumman had gained considerable experience with "swing-wing" technology from its earlier XF10F Jaguar that had been built only as a prototype. The need for rapid development and fielding of the aircraft dictated adoption of Pratt & Whitney TF-30 turbofans similar to those used in the F-111.

Following Grumman's tradition of naming its aircraft after cats, the new "Tomcat" made its first flight in December 1970. After a number of changes following flight testing, the first F-14As were delivered to the Navy in June 1972, with Fighter Squadron (VF) 124 designated to provide crew training. On the West Coast, VF-1 and VF-2 were the first operational squadrons to receive the new aircraft, while on the East Coast VF-14 and VF-32 became the first Atlantic fleet Tomcat squadrons. In 1974, the Marine Corps prepared to stand up VMFA-122 at NAS Miramar, but the program was cancelled when the Marine Corps decided to retain modified versions of the dependable F-4J Phantom II.

The F-14 saw its first combat in August 1981, downing two Libyan Su-22 fighters over the Gulf of Sidra. It saw considerable duty in the Gulf War, Iraq and Afghanistan. The last F-14 retired from active service with VF-213 in 2006. The Museum's F-14A (Bureau Number 157984) is the fifth Tomcat produced and was one of the prototypes used in the early testing of the aircraft. It is the first F-14 Tomcat ever placed on public display.