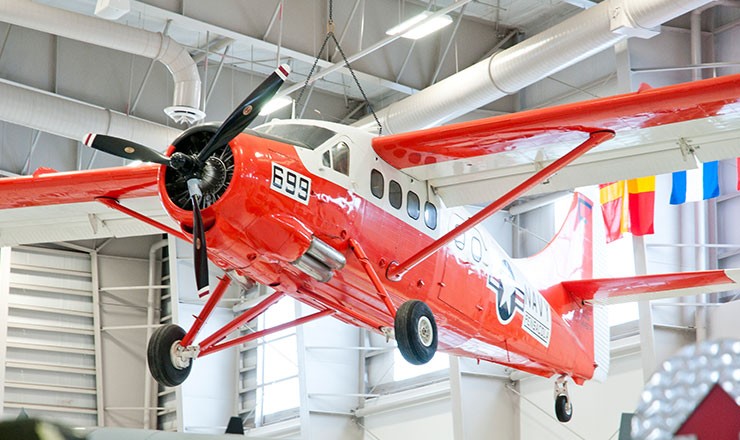 Following the lead of the U.S. Army, which procured its first UC-1 Otter in 1951 for its ability to lift a large amount of cargo from makeshift airfields, the Navy ordered a total of eighteen Otters for utility service. Notably, some of the aircraft, including that on display in the Museum, supported Operation Deep Freeze in Antarctica with Air Development Squadron (VX) 6.

In February 1956, the Navy supplemented the four UC-1 Otters it had ordered the previous year by procuring nine more of the utility aircraft from De Havilland Aircraft of Canada, Ltd. The Otter had a reputation for ruggedness and the ability to operate from makeshift airfields, which made them ideally suited for assignment to Air Development Squadron (VX) 6. Based at Naval Air Station (NAS) Quonset Point, Rhode Island, the squadron served as the aerial support arm for Task Force 43 operations in the harsh, rugged environment of the Antarctic. Bureau Number 144672, currently on display at the National Naval Aviation Museum, was one of three Otters destined for transport to the Weddell Sea area. Disassembled and packaged in crates, on 9 November 1956 the aircraft departed Davisville, Rhode Island, on board the attack transport Wyandot (AKA-92) for the long voyage south.

Entering the Antarctic Circle in mid-December, the ship plowed its way through 1,600 miles of ice covered waters before finding a suitable site for a base on 27 January 1957. Once "ashore," members of VX-6 went about the business of assembling their crated aircraft. A suitable landing field was marked off using barrels. Once assembled, the aircraft began flying over the ice, with Lieutenant Commander Ken Snyder likening the Otter to "a single-engine PBY."

It proved to be a difficult winter for the aircraft. When flying weather returned, and the aircraft were dug out of the snow, the personnel of VX-6 discovered two had been severely damaged. Luckily, Bureau Number 144672 was only in need of a replacement wing. One of its sister aircraft was a total strike. In October 1957, the Museum's aircraft was ready for flight to support Operation Deep Freeze III, transporting cargo and flying in support of scientific field parties operating at various points on the ice, some flights by the Otter lasting over ten hours.

The Museum's aircraft remained with VX-6 until 1965, during which time its designation changed to NU-1B. After serving in various capacities at Naval Air Test Center (NATC) Patuxent River, Maryland, Naval Air Test Facility (NATF) Lakehurst, New Jersey, and the Pacific Missile Range (PMR) Point Mugu, California, the well-traveled Otter made its way to Pensacola in 1975. It suffered extensive damage during Hurricane Ivan in 2004, necessitating extensive restoration work that was completed in 2007.