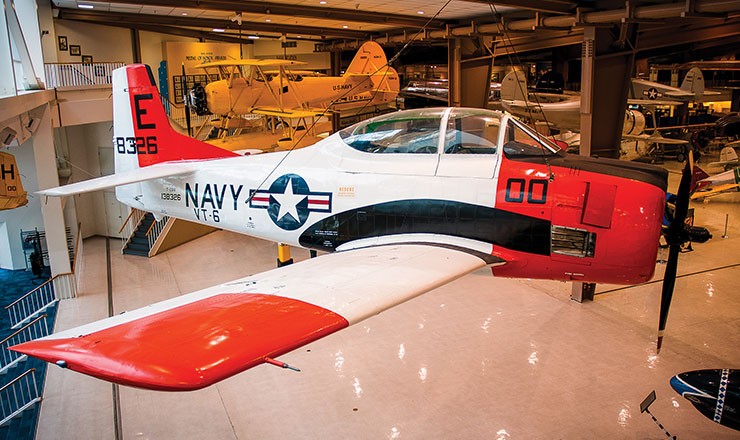 Introduced during the 1950s, North American's T-28 Trojan served into the 1980s in the Naval Air Training Command. T-28s were also actively utilized in the Vietnam War by the U.S. and South Vietnamese Air Forces for use on counter insurgency missions throughout Southeast Asia, and have served with nearly thirty nations around the world.

The Navy acquired the T-28, manufactured by North American Aviation, to use as a basic trainer from 1952-1984, replacing the venerable SNJ. Navy T-28s were derived from an Air Force trainer design, the T-28A, with one very notable exception in that they had twice as much horsepower.

The T-28 had the look, feel, sound, and power of early World War II fighters, something the Navy desired it to have when it entered training service mid-century. Powerful but predictable, the aircraft was an ideal trainer, although it was not pressurized and lacked ejection seats. Cockpit instrumentation, although adequate for instrument flight, would be considered primitive by today's standards. There were two naval variants, the T-28B (like that on display), of which 489 were produced, and the T-28C, equipped with arresting gear for carrier training, of which 299 were made. The prop on the T-28C described an arc nine inches shorter than the T-28B and was flat on the ends of the blades. Together with the tailhook, the aircraft could be readily distinguished apart from the T-28B.

Students found the T-28 sturdy and roomy, with great visibility. In flight it was both responsive and docile, and fully aerobatic. It could be safely spun from relatively low altitudes and counted upon for a nearly instantaneous recovery. Control response was quick, despite the T-28's lack of hydraulically boosted controls, though over the wide range of the aircraft's flight regime pilots had to trim the aircraft incessantly. Slow fight, as necessitated by carrier operations, were particularly impressive, as was the power response of the large radial engine.

In addition to its training duties, the T-28 was actively utilized in the Vietnam War by the U.S. and South Vietnamese Air Force as the T-28D Nomad, which was equipped to carry a variety of weapons ranging from bombs and rockets to napalm for use on counter insurgency missions throughout Southeast Asia. It was especially effective in night operations against targets not protected by radar controlled anti-aircraft batteries, and as armed escorts for A-26 attack aircraft and helicopters. They also operated in hunter/killer teams with observation aircraft equipped with Starlight scopes to locate enemy convoys.

The last T-28 was retired from active duty in the Naval Air Training Command in the spring of 1984, ending 29 years of active service. The Museum's T-28B Trojan (Bureau Number 138326) entered service on 26 September 1955, and after being retired from service in the Naval Air Training Command, it arrived at the Museum in 1990. It is currently displayed in the markings of Training Squadron (VT) 6.