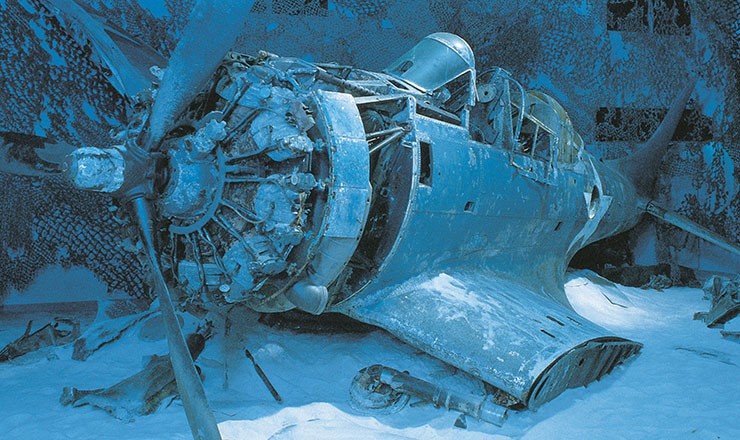 The Douglas SBD Dauntless was the front-line Navy and Marine Corps dive-bomber at the onset of the Pacific War, and served in combat throughout the war though in decreasing numbers as it was supplanted by the SB2C Helldiver. When retired from fleet service, some aircraft were sent to the training command, this example of the SBD-4 found at the bottom of Lake Michigan some fifty years after it crashed during carrier qualification training. It is displayed largely as it appeared while underwater.

No tactic represented Naval Aviation's rise to preeminence during World War II more than dive-bombing, and no aircraft embodied the success of this tactic more than the Douglas SBD Dauntless. An innovative design, the aircraft incorporated perforated dive-flaps which stabilized and slowed it during bombing runs of seventy-plus degree dives.

The initial production aircraft entered service in 1940, and by the time the U.S. entered World War II, ten squadrons operated the SBD. Though replaced starting in 1943, Navy and Marine Corps Dauntless pilots participated in many of the Pacific War's most significant battles, achieving their greatest victory at Midway, where they sank four Japanese carriers. Though the plane was relatively slow and lightly armed, SBD pilots and gunners also shot down 138 enemy aircraft. By July 1944, a total of 5,936 examples of the aircraft had rolled off Douglas assembly lines, far more than were originally planned and a testament to the ruggedness and capability of one of the outstanding Navy attack aircraft of World War II.

Initial orders were placed in April 1939. The first generation of SBDs deployed late in 1940 and early 1941. In March 1941 the Navy started to receive the SBD-3, with self-sealing fuel tanks and increased weaponry. Subsequent variants included the SBD-4, with a 24-volt electrical system, and the SBD-5. The most produced of all SBD variants, the SBD-5 was powered by a 1,200 horsepower R-1820-60 radial engine and had a larger ammunition capacity. Over 2,400 SBD-5s were built, mostly at Douglas' Tulsa, Oklahoma, plant. An SBD-6 was also in design but Dauntless production ended in 1944, in favor of the new SB2C Helldiver.

The SBD-4 (Bureau Number 06833) in the Sunken Treasures exhibit served in squadrons at Naval Air Station (NAS) Norfolk, Virginia, before assignment to the Carrier Qualification Training Unit (CQTU) at NAS Glenview, Illinois. It crashed into the waters of Lake Michigan on 24 August 1944, after suffering an engine failure while launching from the training carrier Sable (IX-81).