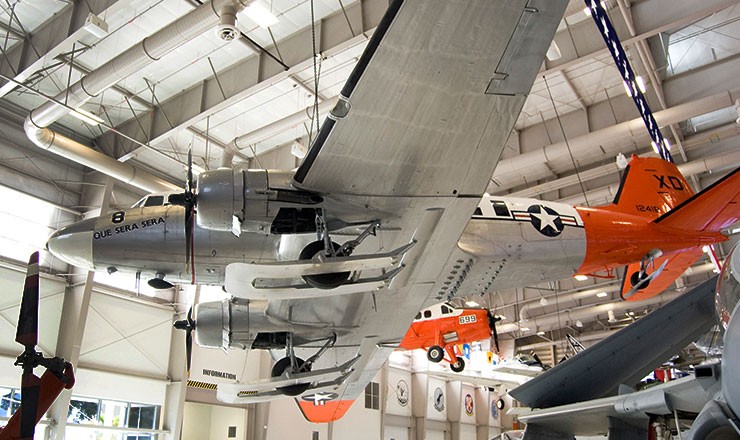 Que Sera Sera was the name given to this R4D-5L (Douglas DC-3) that made the first landing at the South Pole on 31 October 1956. It was named after a popular song of the time. The aircraft's crew of seven were the first Americans to set foot on the pole and the first humans since CAPT Robert F. Scott of the Royal Navy reached it in 1912.

The success of the DC-3 in the commercial market spurred interest in the aircraft from the U.S. military. Of the 10,000 DC-3s ordered by the Army Air Forces, the Navy received 568, designating them R4D Skytrains. Many served in the Naval Air Transport Service created during World War II. Other roles included carrying Marine Corps paratroopers, dropping flares in support of close air support missions in Korea, and supporting expeditions to the Antarctic.

Equipped with skis for operating from the ice cap, the latter birds achieved their first fame in January 1947, when Commander William Hawkes (with Rear Admiral Richard Byrd aboard) led a flight of six R4Ds off the deck of the aircraft carrier Philippine Sea (CV-47) as part of Operation Highjump. This marked the first carrier take-off for the R4D. These planes operated along with six PBM flying boats for 24 days, logging 650 hours of flight time on photographic mapping flights covering 1,500,000 square miles of the interior and 5,500 miles of coastline of the continent of Antarctica.

This was followed by Operation Deep Freeze, and the 31 October 1956, flight of the R4D-5L nicknamed Que Sera Sera (Bureau Number 12418) now on display in the Museum. Piloted by Lieutenant Commander Gus Shinn and under the command of Rear Admiral George Dufek, it made the first landing on the ice at the South Pole, carrying the first Americans to set foot on the spot and the first expedition to reach it since 1912.

Though the polar landing was a bit rough, which was not unusual for the terrain, take-off from the pole proved a challenge. The high altitude of the ice cap—about 10,000 feet at the pole—starved engines of oxygen and robbed wings of their lift. That, along with the plane's 28,000-pound weight, required a jet assisted take off, the JATO bottles normally triggered after the plane hit 30 knots. However, Que Sera Sera remained stuck with the engines at full power—"We just sat on the ice like an old mud hen," Shinn said. To break loose, Shinn fired four JATO bottles. That did the trick, but he was worried about having enough JATO left to get airborne. They barely made it, only to be enveloped in ice and snow, relying on instruments to keep flying.

The JATO racks and landing gear skis remain on the aircraft as a reminder of its special place in aviation history.