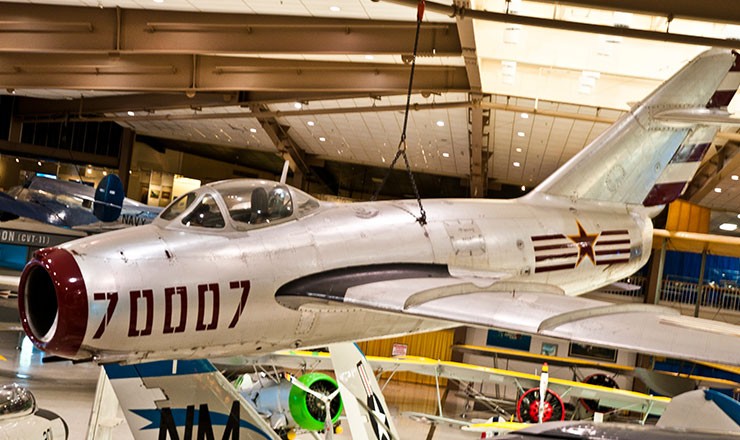 The Soviet MiG-15 was one of the first successful swept-wing fighters, and a potent adversary for Western aircraft. The Navy's first jet vs. jet combat was against the MiG-15, and Lieutenant Commander William T. Amen became the first Naval Aviator to down a MiG-15 in November 1950. While on exchange duty with the U.S. Air Force, Marine Major John F. Bolt became Naval Aviation's only jet ace of the Korean War by shooting down six MiG-15s. Other Naval Aviators who downed MiG-15s in aerial combat were future astronauts John Glenn and Wally Schirra.

In 1939, Josef Stalin directed the establishment of an experimental aircraft design department, headed by Artyom Mikoyan with Mikhail Gurevich working as his principal deputy. The pair became the leading designers of Soviet fighter aircraft, their work bearing the acronym "MiG" (Mikoyan and Gurevich).

Work on the MiG-15 began in 1946, seeking a Mach .9 fighter capable of fighting above 36,000 ft. The British government sold the Soviets Rolls-Royce engines that assisted in developing their own jet engine. The first MiG-15 test flight occurred in December 1948 with production beginning in 1949. The airplane was one of the first successful swept-wing jet fighters. Some 12,000 MiG-15s were Soviet-built, with another 6,000 in foreign production, flying in the air forces of the Soviet Union, China, North Korea and 41 other countries. The MiG-15 design served as a base for development of the MiG-17 which remained an effective threat to American aircraft over North Vietnam into the 1960s.

Initially, MiG-15s outclassed Navy, Air Force and British fighters in combat, but that changed in late-1950 with the appearance of the Air Force's F-86 Sabre, which met the MiG-15 on equal terms. The Navy's first combat against the MiG-15 occurred in November 1950, when Lieutenant Commander William T. Amen shot one down while he was flying an F9F Panther. In September 1952, Marine Captain Jesse G. Folmar claimed the distinction of shooting down a MiG-15 while flying a propeller-driven F4U Corsair. Naval Aviators flying on exchange duty with the Air Force scored MiG-15 kills also, including future astronauts Wally Schirra and John Glenn, as well as Marine pilot Major John Bolt, who became Naval Aviation's first jet ace by shooting down six MiG-15s.

In addition to combat over Korea, from 1950 to 1959 MiG-15s flown by Soviet, Chinese and North Korean pilots were involved in multiple Cold War incidents that included attacks on Navy reconnaissance and patrol aircraft, resulting in deaths and injury of crewmen. The Museum's MiG-15 has been on display since 2002.