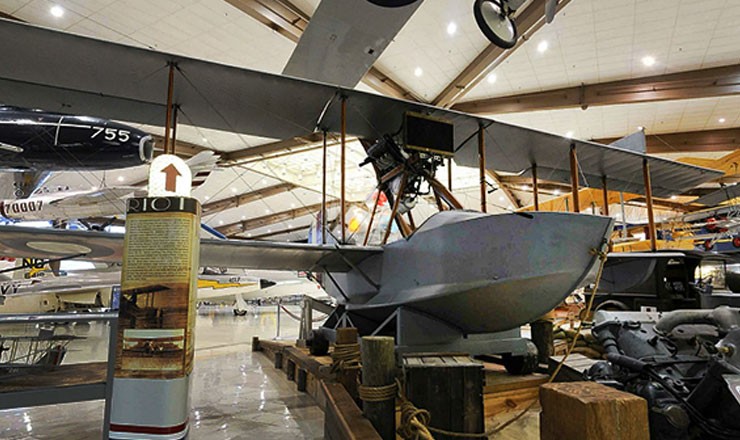 A modified version of Glenn Curtiss' widely used F-Boat, the MF-Boat was built as a trainer and support aircraft. Serving throughout World War I, F and MF-Boats prepared Naval Aviators for their primary mission of anti-submarine warfare over the Atlantic, protecting Allied shipping from the dreaded U-boat. The Museum's aircraft is a rare example and the first of 80 MF-Boats built at the Naval Aircraft Factory.

Following his successful demonstration of a hydroaeroplane, which the Navy procured as its first aircraft in 1911, aircraft manufacturer Glenn Curtiss shifted his design ingenuity to the development of a true flying boat. Numerous experimental designs culminated in the introduction of the C-boats (later designated AB-1/5), a class of flying boat that made notable contributions to the history of U.S. Naval Aviation. As a successor to the ABs, the Navy procured some 144 F-Boats and 102 MF-Boats, the MF meaning "Modified F."

Both Curtiss and the Naval Aircraft Factory built MF-Boats. Designed to serve as trainers, the MFs differed from F-Boats structurally, namely in the sponsons jutting out from the hull in order to impart stability on the water. MFs served in a variety of roles, supporting the newly formed Fleet Air Detachment during operations in the Atlantic Ocean, and operating at most of the Navy's air stations in the immediate postwar years. Standard arrangement allowed for side-by-side seating for instructor and student, with the pusher engine (the propeller facing aft) located above and behind the cockpit.

Even though Curtiss had ceased production of the MF-Boat for the Navy in the months following World War I, the company had not given up on the design, marketing it as the "Seagull" and offering it to civilian buyers beginning in March 1919. With the successful flight of the NC-4 across the Atlantic two months later igniting an interest in seaplanes, Curtiss even began to market the Seagull as a way for people to have an NC of their own. Ironically, the NC-4's co-pilot, Lieutenant Junior Grade Walter Hinton, was one of the customers who operated a Seagull. Hinton flew one Seagull christened Eleanor III during the Rice Expedition of 1924–1925, logging 12,000 miles in a harsh jungle environment in the survey of the headwaters of the Amazon River. A number of Seagulls operated as some of the first commercial passenger aircraft, providing service between Catalina Island and Los Angeles and over Atlantic City.

The Museum's aircraft (Bureau Number A-5483) was the first of eighty MF-Boats built at the Naval Aircraft Factory in 1918, and served until 1922, at which time it was sold to Harry Dallas of Auburn, Massachusetts. The following year Eupilio Andreatto purchased the aircraft. A veteran of service in the Italian Air Force during World War I, Andreatto flew the aircraft on aerial tours of Atlantic City, New Jersey, during the summers (charging $5 per ride) and stored it at the Philadelphia Seaplane Base at Essington, Pennsylvania, during the winter months. The aircraft's last flight came in 1936 from the Philadelphia Seaplane Base with Frank Mills (the base's proprietor) and Albert J. Sidlow at the controls. The aircraft was stored in a garage until acquired by Mr. George S. Waltman around 1960. Purchased by the Navy, the airplane was ironically restored at the former site of the Naval Aircraft Factory in which it had been built. It arrived at the Museum in 1968.