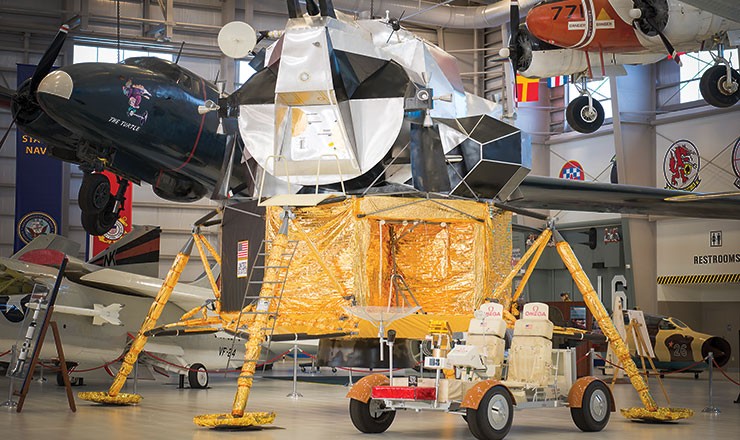 The Lunar Module (LM), is the spacecraft which landed 12 astronauts—seven of which were Naval Aviators—safely on the Moon, designed and manufactured by the Grumman Aerospace Corp. in Bethpage, Long Island, New York.

Designed for a crew of two, the Lunar Module was the lander portion of the Apollo spacecraft. It consisted of two stages, one for descent to the lunar surface and one for ascent to return the crew to the orbiting Command and Service Module (CSM). Additionally, later Lunar Modules featured a number of upgrades for “J-class” Apollo missions (Apollo XV through XVII), allowing them to remain on the surface longer (up to three days) and carry the Lunar Roving Vehicle.

In December 2012, as part of our “Salute to the Pioneers of Space” event commemorating the 40th anniversary of Apollo XVII, and through the support of our presenting sponsor Northrop Grumman, the National Naval Aviation Museum unveiled a replica of the Apollo XVII Lunar Module, Challenger, now on display in Hangar Bay One.