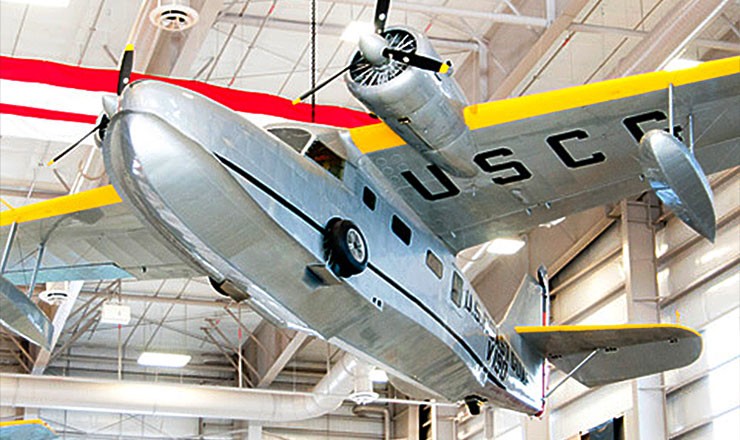 An amphibian capable of operating from the water or a runway, the JRF Goose was the first monoplane and first twin-engine aircraft produced by Grumman Aircraft Engineering Corporation. The versatile JRF was used for target towing, aerial photography, medical evacuation, search and rescue, and anti-submarine warfare. The Museum's aircraft is displayed as a Coast Guard JRF-3, the first version of the Goose equipped with autopilot and deicing boots on the wings for operations in the Arctic.

The G-21A Goose was built beginning in 1937 as a personal executive aircraft and also found customers in commercial airlines and corporations. In the late-1930s, the aircraft began to attract the attention of the U.S. Army and Navy, as well as the air forces of Great Britain, Canada, Japan, Argentina, Bolivia, Brazil, Peru, Portugal and Cuba.

The U.S. Navy and Coast Guard designated the aircraft JRF. Its configuration made it a natural transport and utility aircraft, and both services also outfitted JRFs with bombs and depth charges for anti-submarine work. A total of 215 JRFs served in Naval Aviation, with a handful remaining on flight status in the Coast Guard until the mid-1950s. During that same decade JRFs exported to the France flew riverine patrols during combat operations against the Viet Minh in French Indochina.

The Museum's example of the Goose is a G-21A, the civilian version of the aircraft, and is painted in the markings of one of three JRF-3s procured for the Coast Guard.