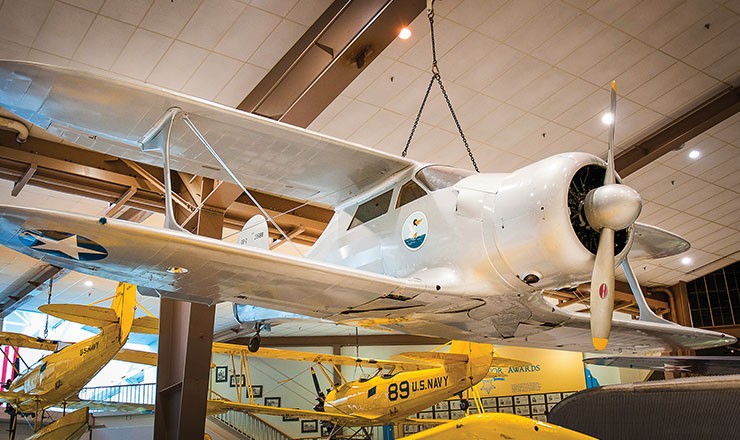 Already famous by 1937, the Beech "staggerwing" Model 17 was first purchased by the Navy in 1937. Designated JB-1, it served as a staff transport for two years. In 1939, the Navy purchased ten Beech D-17s, designating them GB-1s. In all, 360 of the aircraft, 342 of them GB-2s powered by up-rated engines, were purchased by the Navy to use as executive transports and for transporting ferry pilots to factories around the country to deliver new aircraft to the fleet.

Developed by Beech in 1934, the unique "staggerwing" was an instant success in general aviation, and became a valuable asset to the Navy as an executive transport. One of the aircraft, a Beech Model C-17R, was purchased and served in this capacity for two years. In 1939, the Navy purchased ten D-17 models, designating them GB-1s, and acquired eight more impressed from civil sources. The GB-1s were powered by the Pratt & Whitney R-985-48 engines of 400 horsepower. Following that, the Navy purchased a total of 342 GB-2s powered by the R-985-50 engine of 450 horsepower. Named "Traveller," the GB-2 served as both a liaison aircraft and as a transport to take ferry pilots to aircraft factories around the U.S. for pick up and delivery of new aircraft to the fleet. Some were also given to Britain under Lend-Lease for use as liaison aircraft.

The Museum's example of the GB-2 arrived in 1984, and is painted in the markings of an aircraft assigned to Naval Air Station (NAS) Pensacola, Florida.