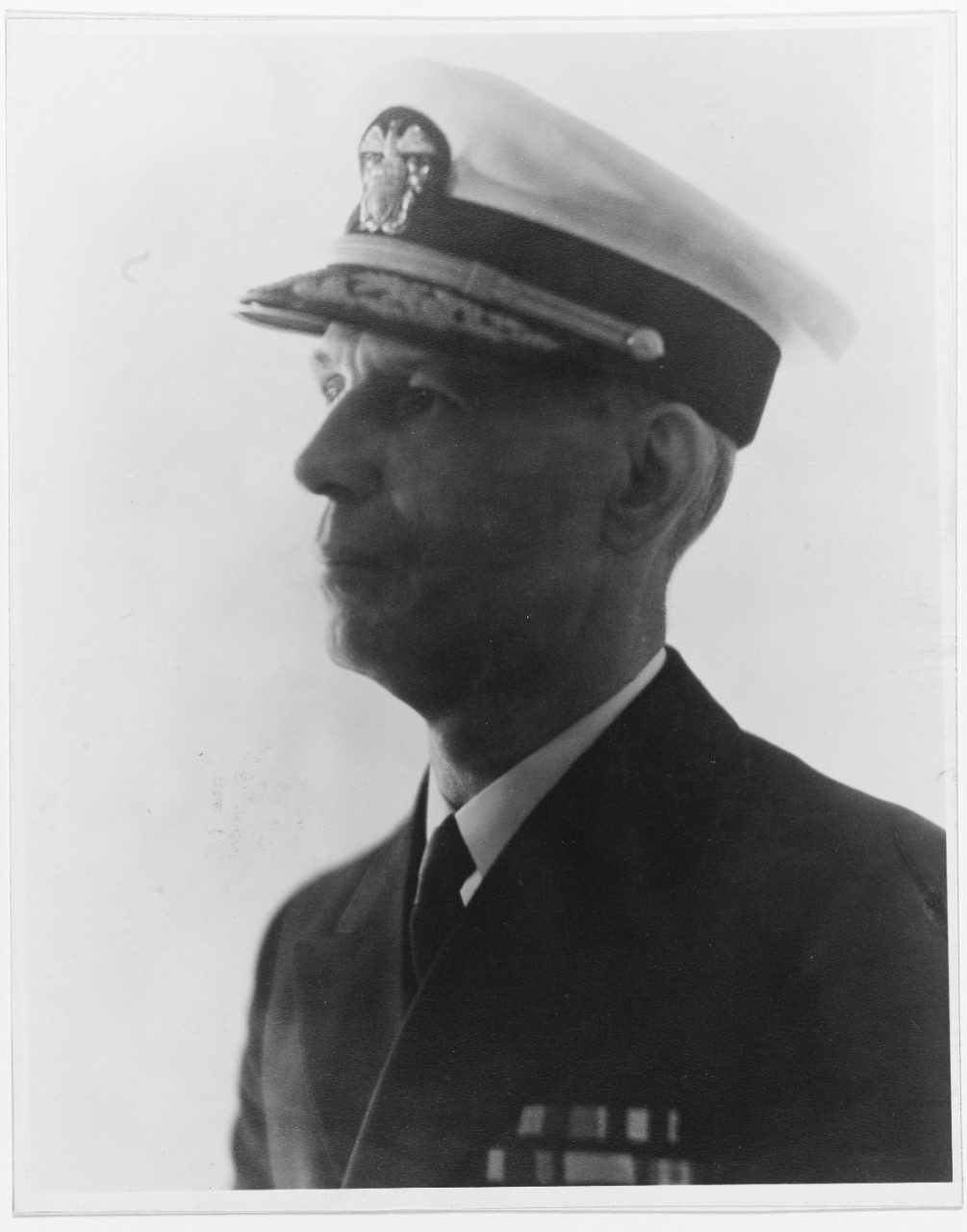 William Theodore Tarrant was born in Black Hawk, Mississippi, on 28 July 1878 son of Edward William and Anne Wilson (Spencer) Tarrant. In 1894 he was appointed from the State of Texas, to the US Naval Academy, Annapolis, Maryland, and was graduated on 2 April 1898. He served the two years at sea, as then required by law, before he was commissioned Ensign on 4 April 1900. Advancing progressively in rank, he attained that of Rear Admiral, to date from 1 October 1930, and from 24 June 1936 to 13 July 1938 served in the temporary rank of Vice Admiral. On 1 August 1942, he was transferred to the Retired List of the US Navy, and advanced to the rank of Vice Admiral.

Following graduation from the Naval Academy in 1898, he joined the Receiving Ship Vermont, and later that same year was assigned to the newly commissioned cruiser New Orleans, which operated during the Spanish American War with the US Naval Forces off Santiago, Cuba. During that period he participated in the Battle of Santiago and commanded the prize steamer Rolinda Rodriguez, which was sent after her capture into Charleston, South Carolina. Returning to duty in the New Orleans, he served in her until 1899, when he was transferred to the USS Vixen.

There followed successive sea service until 1900 in the USS Resolute, the USS Piscataque, the USS New York, and the USS New Orleans. During the Philippine Insurrection he had duty in the USS Brooklyn, operating with the Asiatic Fleet, and subsequently commanded the USS Guardoqui and the USS Mariveles. Again reporting aboard the USS Brooklyn, he served in her during 1902, and later that same year joined the USS Mohican.

Between 1903 and 1905 he was an Instructor in the Department of Mathematics at the Naval Academy, interspersed with duty during 1904 as Watch and Division Officer of the USS Chesapeake. In 1905 he had duty in the USS Hartford, the USS Kearsarge, the USS Charleston and on 13 December 1906 was appointed Squadron Ordnance Officer of the Pacific Squadron. The next year he reported aboard the USS California, and when detached from that vessel was ordered to the Naval Academy to serve as an Instructor in the Department of Electrical Engineering. He remained there until the latter part of 1909 and in 1910 was assigned to the USS Washington as Senior Engineer Officer. Later the same year he transferred, in a similar capacity, to the USS Michigan.

In 1913 he became Engineer Officer at the Navy Yard, Charleston, South Carolina, and in June 1916 reported as Executive Officer of the USS North Carolina. He was serving as such when the United States entered World War I, 6 April 1917. In March 1918 he assumed command of the USS Wilhelmina, which was engaged in transporting troops to France. From June 1918 to January 1919 he was in charge of fitting out submarine chasers at the Naval Station, New London, Connecticut, and was in command of the Naval District Base there and the Second Naval District Base, Newport, Rhode Island. For these services during World War I, he received a commendatory letter from the War Department and a Letter of Commendation from the Navy Department. The latter follows:

"He rendered meritorious service as Commanding Officer of the USS Wilhelmina on one voyage transporting troops to France, and subsequently in fitting out promptly and efficiently, submarine chasers at the Naval Station, New London, Connecticut."

He commanded the USS Oregon between January and June 1919, when he assumed command of the USS Marblehead. Returning to duty ashore he served as Aide to the Commandant of the Navy Yard, Puget Sound, Washington, from August 1919 to June 1921, after which he completed the senior course at the Naval War College, Newport, Rhode Island. In July 1922 he became Commander Mine Squadron TWO, Pacific Fleet, with additional duty in command of the flagship, the USS Baltimore and from 15 September 1922 the USS Ludlow (change in flagship).

In March 1924 he reported as Naval Inspector of Ordnance in Charge at the Naval Ammunition Depot, Iona Island, New York, and continued to serve in that capacity until May 1925, when he was assigned to the Navy Yard, Norfolk, Virginia, as Captain to the Yard. He remained there until May 1927, after which he commanded the USS Arizona until June 1928. Following duty as Chief of Staff to Commander Scouting Fleet, USS Wyoming, flagship, he was assigned, in July 1929, to the War Plans Division, Office of the Chief of Naval Operations, Navy Department.

From June 1930 to August 1932 he served as Chief of Staff to the Commander in Chief Battle Fleet, and Commander in Chief, US Fleet, successively, followed by duty as Commander Cruiser Division FOUR, USS Northampton, flagship. Detached from that command in June 1933 he reported as Commandant of the Eleventh Naval District and Commander Naval Base, with headquarters at San Diego, California. He remained there until June 1936, when in the rank of Vice Admiral, he assumed command of the Scouting Force, US Fleet, flying his flag in the USS Indianapolis.

Reverting to his permanent rank of Rear Admiral, he reported, in July 1938 as Commandant of the Navy Yard, Boston, Massachusetts and for "exceptionally meritorious conduct...as Commander, Northern Forces, Eastern Sea Frontier..." he was awarded the Legion of Merit. The citation continues, in part: "operating in the vitally important area of the First Naval District from the time of our entry into the current war until 1 August 1942, Vice Admiral Tarrant, devised sound and comprehensive measures in combating enemy encroachment in that territory."

On 1 August 1942, he was transferred to the Retired List of the US Navy and in February of the next year was recalled to active duty. He was assigned to Headquarters of the Commander in Chief, United States Fleet, until December 1943, after which he served with the Planning Group of the Office of Strategic Services, Office of the Chief of Naval Operations, Navy Department.

On 5 May 1945 he was appointed by the President of the United States as a member of the Filipino Rehabilitation Commission. He was ordered relieved of all active duty in November 1945.