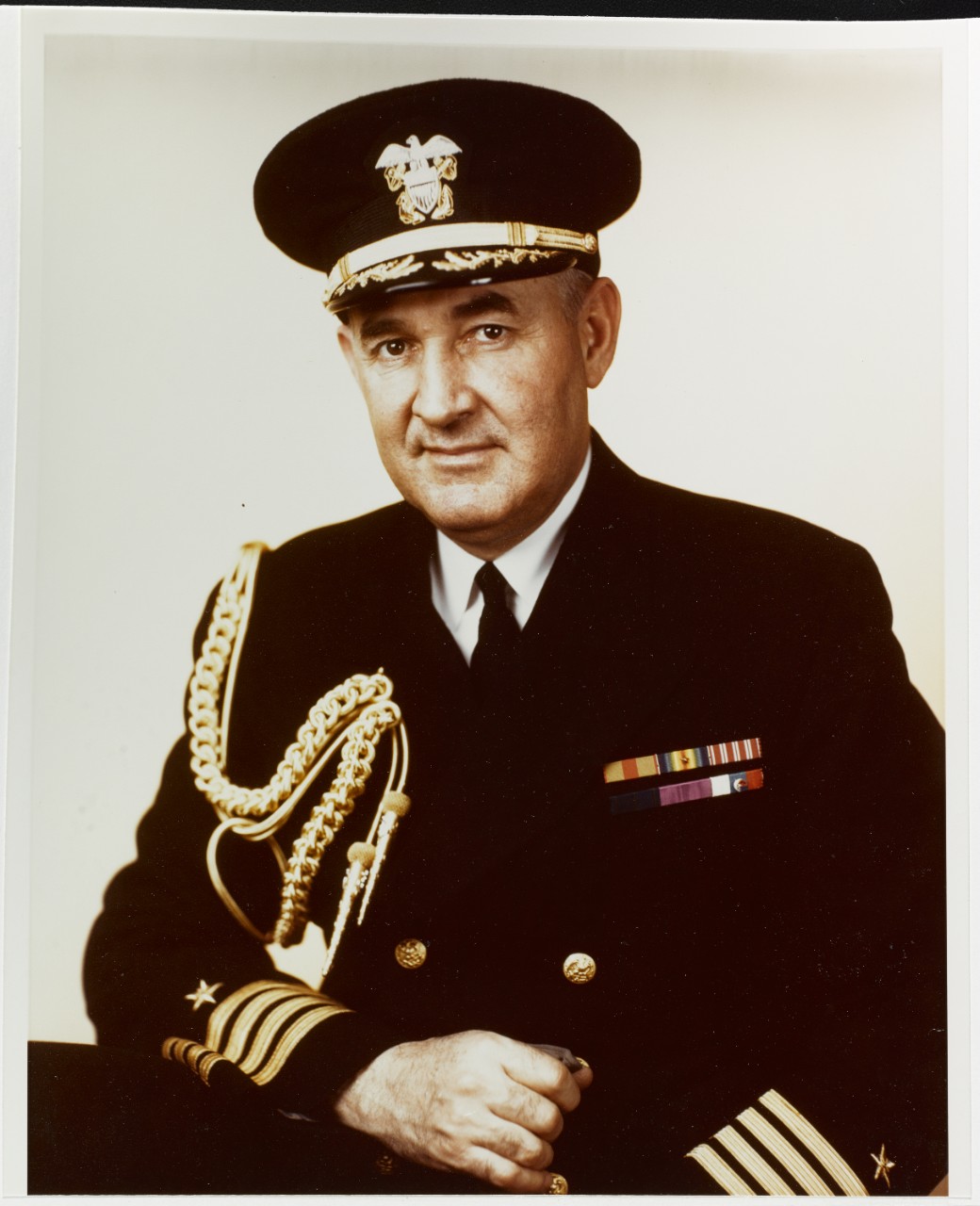 Vice Admiral McCrea was born in Marlette, Michigan, on 29 May 1891, son of Dr. Henry McCrea and Mrs. (Lillie Livingstone) McCrea.

Vice Admiral McCrea was graduated from the US Naval Academy on 4 June 1915, and from the Naval War College, Newport, Rhode Island, in May 1924. He later received degrees of Bachelor of Laws and Master of Laws from George Washington University, Washington, DC, in 1929 and 1934, respectively.

Prior to and during World War I, Vice Admiral McCrea served in the battleship New York, which as a unit of the Sixth Battle Squadron, operated with the British Grand Fleet throughout the last year of the war. Following the Armistice, he had duty in the battleship New Mexico, flagship of Commander in Chief, Pacific Fleet, and later as Aide to the Commander in Chief, and continued duty afloat for several years in the destroyers Burns, Babbitt and Zeilin, and as Executive Officer of the Ramapo.

In 1924 he went to the Asiatic Station, and while in command of the minesweeper Bittern, assisted in the rescue of a Chinese merchantman aground near Chefoo Harbor. He was Aide and Flag Secretary to the Commander, Special Service Squadron in Central American waters in 1930-31, and the next year commanded the destroyer Trever. He served as Navigator of the cruiser Astoria from June 1934 until February 1936, and during the period November 1938 to September 1940 was Executive Officer of the battleship Pennsylvania.

Between wars, on regular rotation of duty between sea and shore, he had three tours in the Office of the Judge Advocate General, Navy Department, and was Aide to the Chief of Naval Operations in 1940-41. During the visit of Prime Minister Winston Churchill to this country, he served as Naval Secretary at the first meetings of the Combined Chiefs of Staff.

Early in World War II he was appointed Naval Aide to the President of the United states, and as such accompanied the President to the Casablanca Conference. He commanded the battleship Iowa from her commissioning, in February 1943, until August 1944, during which period the Iowa transported the President and Joint Chiefs of Staff to Oran for the Cairo and Teheran Conferences in November 1943, returning them from Dakar in December. Under his command the Iowa participated in operations at Kwajalein, Truk, Saipan, Palau and Hollandia; the First Battle of the Philippine Sea, and battles of Mille, Ponape, Saipan and Tinian. Off Guam in February 1944 in daylight action, while a member of a Task Group, the Iowa engaged and sank a Japanese cruiser. He was awarded the Legion of Merit, with Combat "V", for exceptionally meritorious service in that command.

In the rank of Rear Admiral, he commanded Cruiser Division ONE and a Task Force in Aleutian waters, in the North Pacific. He was awarded a Gold Star in lieu of the second Legion of Merit with Combat V, for outstanding service in the vicinity of the Kurile Islands from August 1944 to April 1945. Upon his return to the Navy Department, he was appointed Director of the Central Division, Office of the Chief of Naval Operations, his title later changed to Assistant Chief of Naval Operations for Administration. On 31 August 1946 he was appointed Deputy Chief of Naval Operations for Administration, and advanced to the rank of Vice Admiral.

In the rank of Vice Admiral he served as Deputy Commander in Chief Pacific Command and US Pacific Fleet, and from June 1949 to January 1952 as Director of the Staff (later Deputy Director) Personnel Policy, Office of the Secretary of Defense, Washington, DC. On 29 February 1952 he assumed the duties of Commandant, First Naval District, in his permanent rank of Rear Admiral. He was transferred to the Retired List of the US Navy in June 1953 and was advanced to the rank of Vice Admiral, the highest rank held while on active duty.