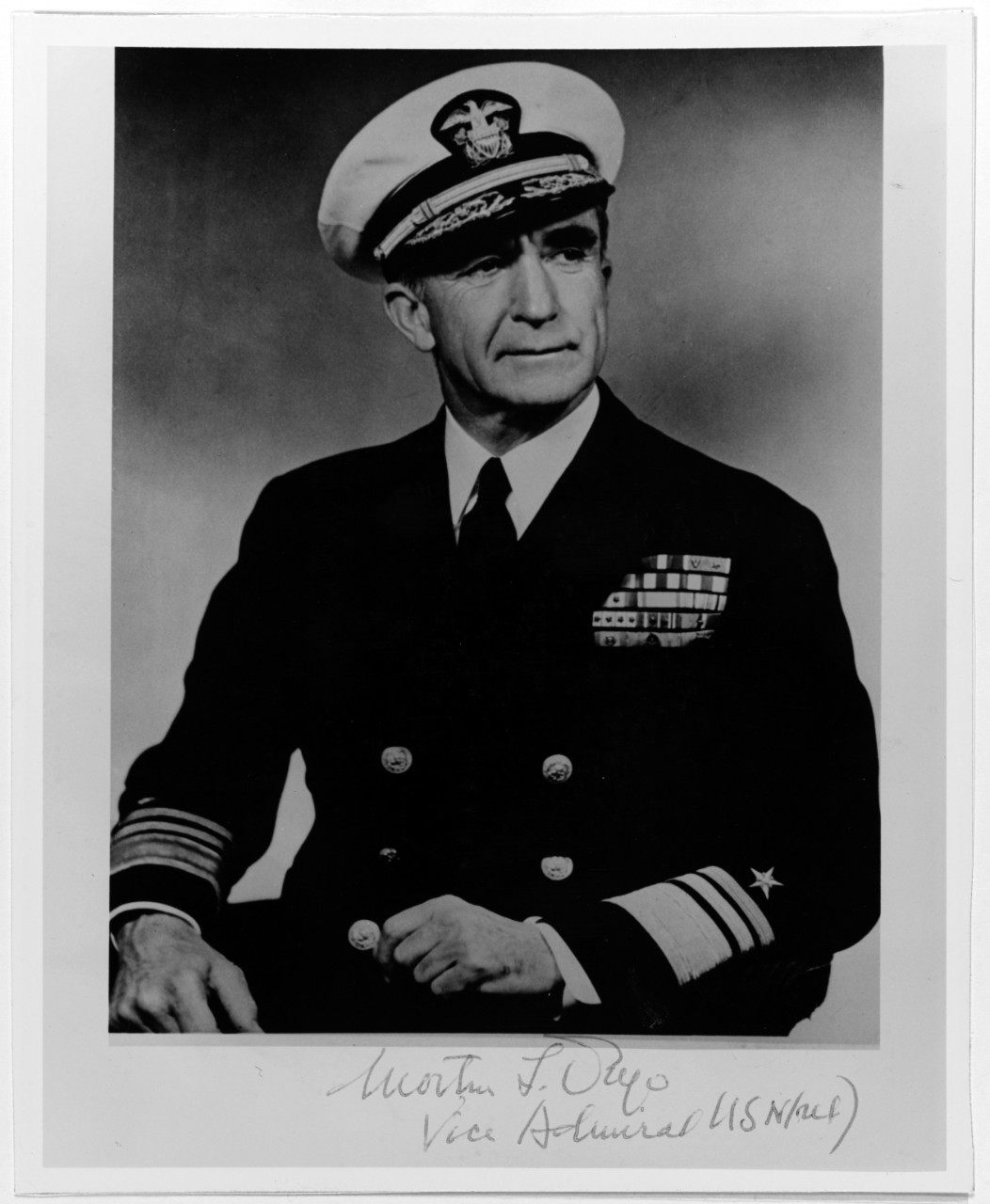 Morton Lyndholm Deyo was born in Poughkeepsie, New York, on 1 July 1887. He was appointed to the US Naval Academy, Annapolis, Maryland, from New York in 1907. Graduated in June 1911, he began the service at sea, then required by law, and was commissioned Ensign on 7 March 1912, when the law was changed. He subsequently progressed in rank to that of Rear Admiral, to date from 13 May 1942, and on 1 August 1949 when he was transferred to the Retired List of the Navy; he was advanced to the rank of Vice Admiral on the basis of combat situations.

After graduation in 1911, he served consecutively until June 1916, in USS Virginia, USS Duncan, USS Washington, and USS Jenkins. After assisting in the fitting out of USS Allen, he joined that destroyer at her commissioning, 24 January 1917, and was on board when she served with the Destroyer Force based on Queenstown, Ireland, during World War I. Detached from USS Allen in May 1917, he had duty until December of that year in connection with training crews for destroyers at Boston, Massachusetts, after which he reported for duty in USS Northern Pacific, engaged in transporting troops from Europe to the United States.

In March 1919 he was transferred to USS Pretoria, and in July 1919 assumed command of USS Morris, serving in that command the following year. He then served as Aide to the Commandant First Naval District, Boston, Massachusetts, from July 1920 until June 1921, when he was assigned duty as Aide on the staff of Admiral Samuel S. Robinson, USN, and Military Governor of Santo Domingo. He assisted in fitting out USS Detroit, but was detached upon her commissioning, 31 July 1923, and again reported for duty as Aide and Flag Lieutenant on the staff of Admiral Robinson, then Commander Battle Fleet, USS California flagship, continuing duty from October 1925 when Admiral Robinson became Commander in Chief, US Fleet, his flag in USS Seattle.

In July 1926 he returned to the Naval Academy, where he served as an Instructor in the Department of Seamanship and Flight Tactics during the academic year 1926-1927 and in the Executive Department for the two succeeding years. He commanded USS Sloat from June 1929 until June 1930, and for two years thereafter, was in command of USS Upshur.

After completing the Senior Course at the Naval War College, Newport Rhode Island, in 1933, he served on the staff of that college, until December 1934, when he joined USS Milwaukee as Executive Officer. From October 1936 until January 1939 he was Operations Officer on the staff of Commander in Chief, Asiatic Fleet, (Admiral H. E.Yarnell, USN).

After his return to the United States, he assumed duty, reporting in April 1939 as Assistant Hydrographer, Navy Department, Washington, DC. He served in that assignment until February 1940 when he was designated Aide to the Secretary of the Navy, the Honorable Charles Edison. In July 1940 the Honorable Frank Knox became Secretary of the Navy and he continued as Aide until April 1941, when he assumed command of Destroyer Squadron 11. In September l941 he commanded the first American escort to accompany an Allied convoy to Iceland.

In February 1942 he was ordered to the Navy Yard, Philadelphia, to fit out USS Monticello, and commanded that auxiliary transport from her commissioning date, 16 April until June 1942. In July he assumed command of USS Indianapolis. Under his command that cruiser engaged in patrol work in the Aleutians, bombarding

Kiska in August 1942 and participating in the covering operations for the Adak occupation force; and operated in the Bering Sea until mid-October. She steamed into Pearl Harbor in November that year, and he was detached on 2 December 1942.

He was next assigned command of Destroyers, Atlantic Fleet, and for the next forty-one months had a succession of commands in the Atlantic and Mediterranean, the last of which was a Task Force in the invasion of Normandy and southern France in the summer of 1944. During his service in the Atlantic, he flew his flag aboard the destroyer tender Denebola in 1943 as Commander of Destroyers, Atlantic Fleet, in the aircraft carrier Ranger until June 1944, and thereafter in Tuscaloosa.

After commanding the Fire Support Group for the assault on Normandy, Vice Admiral Deyo, in command of a larger Task Force, executed a large-scale bombardment of Cherbourg in coordination with the assault of that key city by the Seventh Corps, US Army. Two hours after this bombardment, which was conducted under very heavy opposition from the German shore batteries, the Seventh Corps entered the city. In the assault upon the south coast of France, he commanded one of the two US Bombardment Groups. He was awarded the Legion of Merit and a Gold Star in lieu of the second Legion of Merit with the citations in part, following:

Legion of Merit: "For exceptionally meritorious conduct...as Commander of the Gunfire Support Group of Assault Force 'U' during the amphibious invasion of the enemy German held coast of Normandy, commencing 6 June 1944. After careful planning, Rear Admiral Deyo skillfully directed his force during the assault period of the invasion and, by the effective fire support of his various units, contributed to the successful landings by the First United States Army on the beaches in the Madeleine area. On 25 June, in the face of determined hostile opposition, the warships under his command, blasted the enemy strong points in the vicinity of Cherbourg, effectively supporting the advance of our army on this vita1 port. Real Admiral Deyo's brilliant leadership and indomitable courage were important factors in the success of the Allied invasion of this strategic area."

Gold Star in lieu of a Second Legion of Merit: "For exceptionally meritorious...services to the Government of the United States as Commander of a Support Group of the Western Naval Task Force during the amphibious invasion of Southern France in August 1944. Demonstrating the highest qualities of professional skill and leadership, Rear Admiral Deyo rendered conspicuous service in providing effective support fire by shore bombardment for the right flank assault landings of elements of the United States Seventh Army. In well-coordinated action with aircraft of the Mediterranean Allied Air Force and British and French bombardment units, he skillfully directed accurate and destructive fire against beach defenses, shore installations and other strong points, contributing in large measure to the rapid eastward advance of our ground forces which resulted in the early occupation of German-held ports, denying their use to the enemy for possible seaward evacuation..."

On 16 September 1944 he returned to the United States, leaving his flagship, the Tuscaloosa at the Philadelphia Navy Yard. Later that month he reported to the Commander in Chief, Pacific Fleet, and was assigned duty in November of that year as Commander, Cruiser Division 13, USS Santa Fe, flagship. In this capacity he participated in the strikes on Luzon and Formosa, the Leyte campaign, the first strikes on Tokyo and bombardment of Iwo Jima.

"The Force under Rear Admiral Deyo's command delivered effective bombardment to cover the successful amphibious landing executed by our troops and subsequently providing gunfire support of the land campaign, at the same time fighting fiercely against repeated attacks by aircraft and suicide surface craft. Although his flagship was hit by an enemy suicide plane during one action, Rear Admiral Deyo synchronized the units of his force to destroy enemy gun emplacements and strongpoints, disperse troop concentrations, harass hostile counterattacks and support attacks by our troops. Continuing these operations without interruption, the Gunfire and Covering Force under his direction destroyed a number of Japanese planes and frustrated all attempts launched by the enemy to attack our transports with suicide boats..."

Following the capitulation of the Japanese in August 1945, and the formal signing of the surrender terms by Japan in September 1945, Vice Admiral Deyo, still in USS Santa Fe, directed the landing of occupation troops (Fifth Amphibious Corps, US Marines) in all of Kyushu and Western Honshu. He arrived at the Japanese Naval Base of Sasebo, on the west coast of Kyushu, on 19 September 1945, aboard the destroyer Ralph Talbot, and made preliminary arrangements with Japanese authorities for the landings, inspecting 574 Naval units as part of the program of demobilizing what then remained of the Japanese Fleet. He then commanded the Northern Japan Force in Northern Honshu and Hokkaido, in charge of demilitarizing that area in cooperation with the US Army Ninth Corps.

Detached from command of cruiser Division 13 on 25 November 1945, he returned to the United States, and on 7 January 1946 reported for temporary duty in the Bureau of Naval Personnel, Navy Department, Washington, DC. On 15 January he was appointed Senior Member of a board to study and made recommendations on the Naval Training Centers which should be retained for recruit training in the post-war Navy. In April 1946 he reported for duty as commandant, First Naval District, Boston, Massachusetts, and on 20 June 1947 assumed additional duty as Commander, Naval Base, Boston, Massachusetts. On 1 August 1949 his retirement became effective.