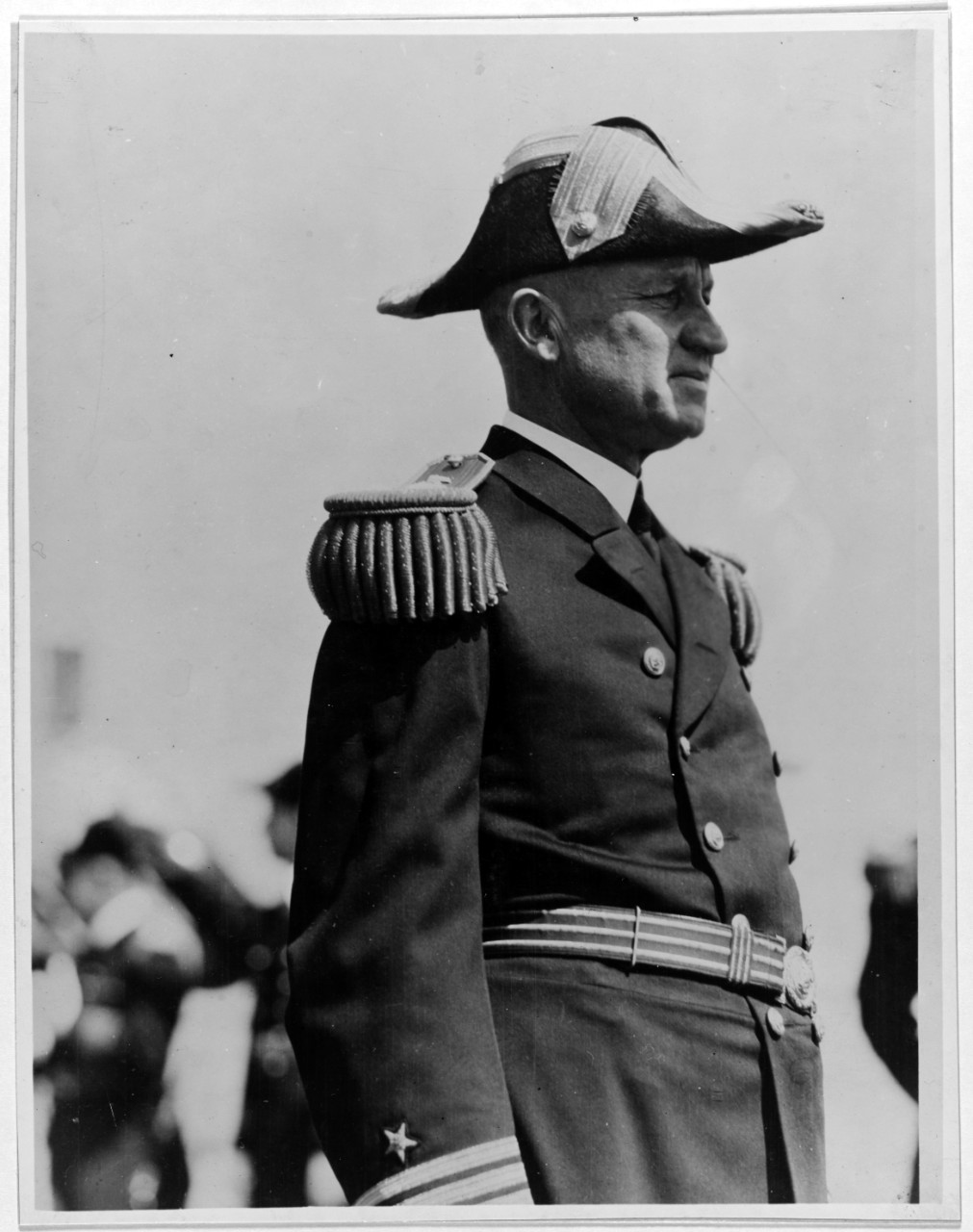 Louis Rudolph de Steiguer was born in Athens, Ohio, on 18 March 1867, son of Judge and Mrs. John Rudolph De Steiguer. He died at the Naval Hospital, Bethesda, Maryland, on 19 April 1947, and was buried two days later at the Arlington National Cemetery.

Appointed Naval Cadet by the Honorable C H Grosvenor of the Fourteenth Congressional District of Ohio, he entered the US Naval Academy, Annapolis, Maryland, on 17 March 1885. Completing the four year course in June 1889, he served the two years at sea, then required by law, and was commissioned Ensign on 1 July 1891. Through subsequent promotions he attained the rank of Rear Admiral on 31 December 1921, and served in the temporary rank of Vice Admiral from 4 September 1926 until 10 September 1927, and in the rank of Admiral from the latter date until 26 June 1928. He was transferred to the Retired List of the Navy in the rank of Rear Admiral on 1 April 1931, and on 16 July 1942, by Act of Congress of that date, he was advanced to the rank of Admiral on the Retired List.

Following detachment from the Naval Academy, he served his first two years at sea in the cruiser Atlanta, and as a commissioned officer had sea duty from 1891 to 1895 in the US ships Mohican, Baltimore (one of the first steel cruisers commissioned in the US Navy), Philadelphia, again Baltimore, Thetis, Monterey (old monitor), and Constellation. In 1896 he was ashore for several months in the Office of Naval Intelligence, Navy Department, Washington, DC, and later that year had duty afloat in USS Michigan, gunboat, and USS Katahdin, a ram ship.

Reporting to USS Montgomery in 1897, he served as a Watch and Division Officer of that cruiser, a unit of the North Atlantic Squadron, during the Spanish-American War, and was aboard USS Nashville during the Philippine Campaign. In 1900 he had duty, still at sea, in USS Monterey and USS Solace, and returned to the Navy Department for further duty in the Office of Naval Intelligence.

After duty from 1901 to 1904 in the Receiving Ship Franklin and USS Illinois, he had a tour of shore duty in New York, first at the Naval Recruiting Station and later as Assistant to the Supervisor of the Harbor of New York. Early in 1906 he had instruction in the Compass Office of the Bureau of Equipment, and then again joined USS Illinois, this time for two years' duty as Ordnance Officer. He served as Executive Officer of USS Connecticut in 1908, and during the next two years had duty as Inspector in Charge of the Fifth Light House District.

He assumed command of USS Panther in July 1911, and remained in command of that repair ship (a converted cruiser) in the Atlantic until July 1913, when he reported for a tour of duty as Captain of the Yard, Navy Yard, Norfolk, Virginia. In 1915 he commanded the Receiving Ship, New York, New York, with additional duty in command of USS Maine, and later commanded USS Kearsarge, a battleship assigned to the US Atlantic Reserve Fleet.

A student at the Naval War College, Newport, Rhode Island, in 1916, he was assigned, upon completion of the course, as Chief of Staff to the Commandant, Third Naval District, with additional duty in command of all ships afloat attached to that Naval District. He continued in that assignment during the first year of World War I, and in 1918 commanded USS Arkansas, which operated with the British Grand Fleet in the War Zone.

For his World War I service he was awarded the Distinguished Service Medal with citation as follows: "For exceptionally meritorious service in a duty of great responsibility, first as Chief of Staff in the Third Naval District and later as Commanding Officer of USS Arkansas operating in the War Zone in association with the British Grand Fleet."

After the Armistice he remained in command of the Arkansas until 1920, when he became Commandant of the Norfolk Navy Yard, Portsmouth, Virginia. The next year he was detached and appointed Hydrographer, Bureau of Navigation, Navy Department, and later in 1921 he was designated Commander Train, Atlantic Fleet, in the rank of Rear Admiral. In 1922, upon reorganization of the Fleet, his title was changed to Commander Train, Scouting Fleet. Upon his detachment in 1923, he assumed the duties of Commandant, First Naval District, and collaterally served as Commandant of the Navy Yard, Boston, Massachusetts.

In 1925 he again went to sea, this time in command of Battleship Division FOUR of the Battle Fleet, and the next year, with the temporary rank of Vice Admiral, he was designated Commander, Battleship Divisions, Battle Fleet. On 10 September 1927, he was commissioned Commander in Chief, Battle Fleet, with the accompanying rank of Admiral, and served in that high command until 26 June 1928. He then reverted to his permanent rank of Rear Admiral and served as Commandant of the Third Naval District and of the Navy Yard, New York, from 2 July 1928 to 18 March 1931, when he reached the statutory retirement age. His retirement was effective 1 April 1931.

Admiral de Steiguer had been a member of the Army-Navy Club, Washington, DC; the Chevy Chase Club, Chevy Chase, Maryland; and the New York Yacht Club.