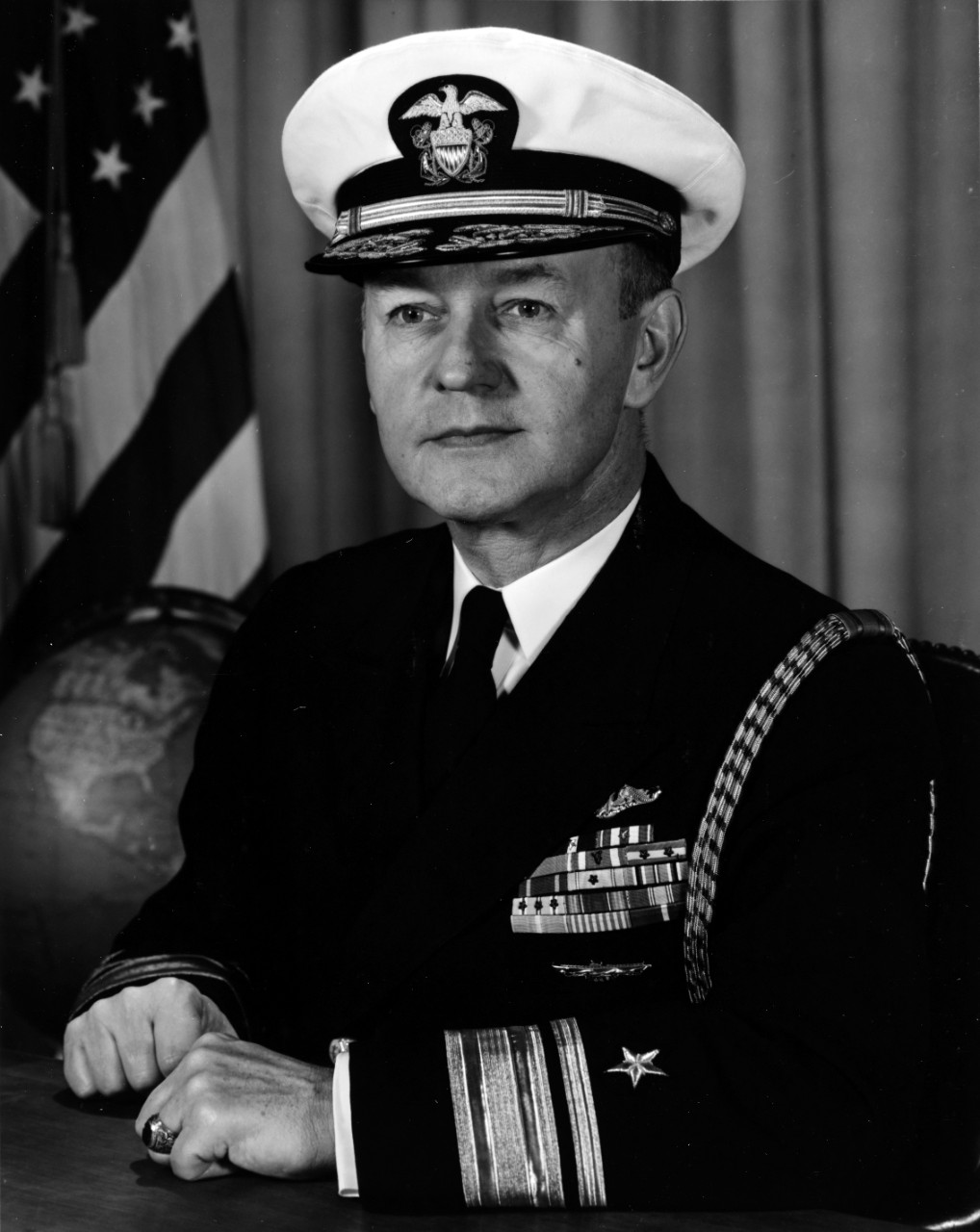 Roy Stanley Benson was born in Concord, New Hampshire, on 7 December 1906. He graduated from high school in that city. He joined the Navy by entering the US Naval Academy, Annapolis, Maryland, in 1925. Graduated and commissioned Ensign in June 1929, he subsequently was promoted as follows: Lieutenant (junior grade), 1932; Lieutenant, 1937; Lieutenant Commander, 1942; Commander, 1943; Captain, 1945; Rear Admiral, 1956.

After graduation from the Naval Academy in June 1929, he joined USS New York, and served as a junior officer of that battleship until December 1930. Following three years' duty in the Destroyer Smith Thompson, operating on the Asiatic Station, he reported in June 1934 for submarine instruction at the Submarine Base, New London, Connecticut. Upon completing the course in December 1934, he had successive duty in the Submarines R-14, S-42, and S-27. He then returned to the Naval Academy where from June 1937 until May 1939 he had duty as an instructor in Navigation.

Letter of Commendation - Commander in Chief, Pacific: "For material assistance during the successful attack on a screened Japanese aircraft carrier during the engagement off Midway Island in June 1942. The attack delivered despite repeated enemy antisubmarine measures consisting of gunfire barrage by surface ships and aircraft, depth charging and bombing, resulted in three torpedo hits being made on the 10,000 ton carrier, which sank the carrier."

Presidential Unit Citation - USS Nautilus: "For outstanding performance in combat during three aggressive war patrols in enemy-controlled waters. Operating far from the home base, the Nautilus sought out the enemy and boldly struck, inflicting severe damage on enemy shipping. Her fine fighting spirit implemented by the expert seamanship and skill of her officers and men reflect great credit upon the United States Naval Service."

Navy Cross: "For extraordinary heroism and exceptional achievement as Commanding Officer of USS Trigger during action against enemy Japanese forces in the Pacific Area while carrying out an assigned task. Skillfully maneuvering his submarine... (he) accomplished a difficult minelaying operation and personally observed the destruction of an 8,400 ton vessel resulting from contact with one of his mines. Later...he executed aggressive and daring attacks on hostile ships, sinking 15,271 tons of enemy shipping, and...bought his ship safely to port..."

Gold Star in lieu of second Navy Cross: "For extraordinary heroism...patrolling in dangerous, enemy-controlled waters (he) directed the operations and torpedo fire of his vessel with splendid initiative and expert tactical skill. On one occasion...his ship was responsible for the severe damaging of an enemy aircraft carrier... (he) contributed greatly to the success of his command in sinking an important amount of Japanese shipping."

Silver Star Medal: "For conspicuous gallantry and intrepidity...as Commanding Officer of USS Trigger during a submarine war patrol in enemy-controlled waters...spent close to the Japanese homeland. With great courage and daring, (he) pressed home the attacks against enemy forces and, as a result, Trigger sank one freighter of 5,000 tons and damaged 24,100 tons of enemy shipping...bringing his vessel back to port with no material damage and with his crew in excellent fighting spirit."

Gold Star in lieu of second Silver Star Medal: "For gallantry and intrepidity in action...as Commanding Officer of a United States Submarine during a war patrol of that vessel. Despite adverse weather conditions, his determination and tenacity enabled him to deliver successful attacks which damaged or sank more than 21,000 tons of enemy shipping. His conduct throughout was an inspiration to his officers and men and in keeping with the highest traditions of the United States Naval Service."

Presidential Unit Citation - USS Trigger: "For outstanding performance in combat during her Fifth, Sixth and Seventh War Patrols against the enemy. Employing highly daring and hazardous tactics, the USS Trigger struck at the enemy with consistent aggressiveness, seeking out and pursuing her targets with dogged determination regardless of unfavorable attack conditions. Her exceptionally notable record of severe damage inflicted on hostile shipping and the gallant fighting spirit of her officers and men reflect great credit upon the United States Naval Service."

Relieved of command of the Trigger in July 1943, he was placed in command of the Prospective Submarine Commanding Officer's School, Submarine Base, New London, Connecticut. From June until October 1944 he commanded the Submarine Razorback, and later commanded Submarine Division FORTY-TWO. For outstanding services he was awarded the Legion of Merit, citation stating in part:

"...He made many material contributions to the training, overhaul and general readiness of submarines in his division. During this time, submarines under his command completed many war patrols which resulted in the sinking and damaging of many thousands of tons of enemy shipping. Much of the credit for the many successful war patrols and the severe damage inflicted upon the enemy was due to his efficient administration, excellent judgment and inspiring leadership..."

After serving for two years as the Navy's Director of Public Information, Office of Information in the Pentagon, he was a student at the National War College, Washington, DC, from August 1952 until June 1953. He commanded the USS Bayfield (APA-33) of the Amphibious Force, Pacific Fleet during the period July 1953 until June 1954, serving most of the time with the SEVENTH Fleet in the Far East. From August 1954 until August 1955 he was Commander Amphibious Squadron SIX, Amphibious Force, Atlantic Fleet, and spent most of that time with the SIXTH Fleet in the Mediterranean.

In September 1955 he was assigned to the Bureau of Naval Personnel, Navy Department, and on 8 August 1956 became Assistant Chief of Naval Personnel (Education and Training). On 2 May 1957 he assumed command of Cruiser Division ONE in Yokosuka, Japan. In June 1958 he became Deputy Commander and Chief of Staff, Military Sea Transportation Service, with headquarters in Washington, DC.

In March 1960 he assumed command of the Submarine Force, Pacific Fleet, with headquarters at Pearl Harbor, Hawaii, and from September 1962 until June 1966 was Assistant Vice Chief of Naval Operations and Director of Naval Administration, Navy Department, after which he served as Director of a Special Task Force until February 1969. "For exceptionally meritorious service...from August 1962 until February 1967..." he was awarded a Gold Star in lieu of the Second Legion of Merit. The citation continues in part:

"As Assistant Vice Chief of Naval Operations/Director of Naval Administration, Rear Admiral Benson consistently demonstrated outstanding leadership, resourcefulness and managerial ability in planning, organizing and coordinating the many diverse activities of his office. He was deeply involved in the planning for, and implementation of, the reorganization of the Navy Department and, in March 1966, directed the preliminary work leading to the preparation of studies and analyses which became part of the data input to the Task Force which he was designated to direct. As Director of a Task Force to study the structure of the Department of the Navy incident to the unilineal organization effected in May 1966, Rear Admiral Benson inspired confidence and created an atmosphere of objective and rational approach to the many problems of a complex organization and its related intricate tasks and responsibilities, contributing in large measure toward the implementation of many of the recommendations of the Task Force even before its final plan and recommendation had been promulgated. His tact, diplomacy and adroitness in gaining the acceptance of officials involved in these recommendations was a major achievement in itself..."

In April 1967 he reported as Commandant of the First Naval District, with additional duty as Commander of the Naval Base, Boston, Massachusetts, and "for exceptionally meritorious service...(in that capacity)..." he was awarded a Gold Star in lieu of the Third Legion of Merit. The citation further states in part:

"...Rear Admiral Benson displayed skilled diplomacy, sound judgment, and outstanding leadership in coordinating the activities of the many Naval commands in his area, thereby greatly enhancing the support provided to the operating forces of the Navy. His relationship with the civilian community was particularly exemplary and was characterized by mutual respect and vigorous action in solving mutual problems. (His) thorough knowledge of the organization and management of the Navy, coupled with his ability to communicate with conviction and expertise, made him an invaluable asset in enhancing the position of the Navy. Through his personal attention and constant support of recruitment in the Regular Navy and the Naval Reserve, he contributed greatly to the success of the Navy recruiting program in the First Naval District. Largely due to (his) skillful guidance, the First Naval District was commended by the Department of Defense for the excellent summer recreation program offered to disadvantaged youths of the area..."

On 1 January 1969 he was transferred to the Retired List of the US Navy.