A light wind from the west. The first U.S. Navy ship named Zephyr.

Zephyr (PC-8) was laid down on 6 March 1993 at Lockport, La., by Bollinger Machine Shop and Shipyard; launched on 3 December 1993; sponsored by Mrs. Barbara A. Andrews, state office manager for Senator Theodore F. Stevens of Alaska; and commissioned on 15 October 1994 at Corpus Christi, Tex., Lt. Robert A. Stubblefield Jr., in command. 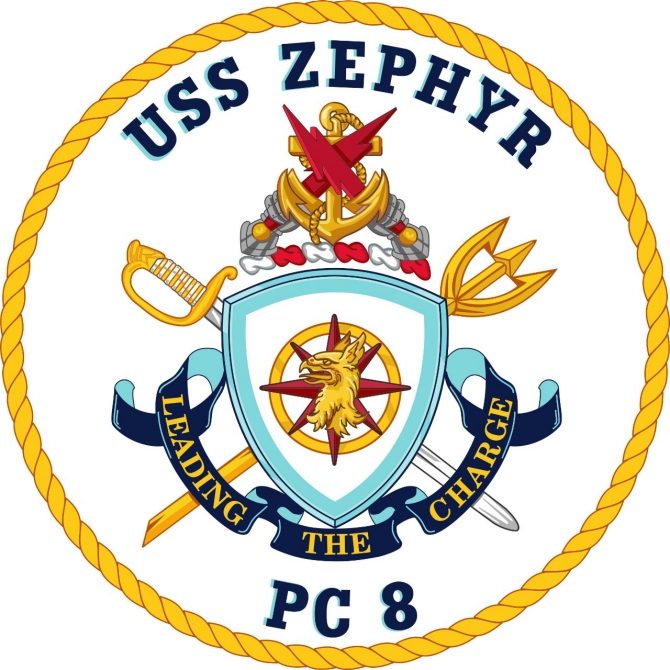 The trident, adapted from the Navy special warfare insignia, is crossed with a Navy sword and refers to the ship’s mission of providing support for the special warfare forces.

Dark blue and gold are the colors traditionally associated with the Navy and represent the sea and excellence.

The Coast Guard acquired five of the Navy’s Cyclone (PC-1)-class patrol boats beginning on 1 October 2004. The Coast Guard initiated the action because of its aging fleet, increased operational hours following the terrorist attack on 11 September 2001, delays in delivery of the converted 123-foot patrol boats, and the continued deployment of 110-foot cutters to the Arabian Gulf, all of which created a gap in patrol boat availability. The transfer immediately lessened shortfalls in patrol boat hours. The Navy and Coast Guard signed an agreement in August 2004 that allowed five ships to be under the operational command of the Coast Guard. Two of the five ships were scheduled to be returned to the Navy in 2008; the remainder in 2011.

Coast Guard Pacific Area and the U.S. Pacific Fleet jointly announced on 5 November 2001, the assignment of two of the Cyclone-class ships, Monsoon (PC-4) and Zephyr, in support of the nation’s homeland security along the U.S. West Coast as a part of Operation Noble Eagle (where they operated under the tactical control of the Coast Guard Pacific Area command). Operational control of the ships, normally assigned to Special Operations Command through Commander, Naval Special Warfare Command, shifted to the Pacific Fleet. Three other Cyclone-class ships, Shamal (PC-13), Tempest, and Tornado (PC-14), were to be assigned to the Atlantic Fleet for maritime homeland security operations, and home ported at Pascagoula, Miss. The Memorandum of Understanding directed the Navy to retain ownership as well as the responsibility for all life cycle management/maintenance, depot management, and casualty corrective service through 2008.  The Coast Guard assumed the “responsibility for crew assignment, cutter funding, retrofitting, operation and management.” Zephyr was decommissioned and transferred to the Coast Guard, which reclassified her as WPC-8 on 1 October 2004. During one counter-narcotics patrol, the cutter confiscated nearly seven tons of cocaine and apprehended 17 suspected drug traffickers.

On the evening of 20 April 2010, an explosion erupted on Deepwater Horizon, a semi-submersible Mobile Offshore Drilling Unit operated by Transocean for British Petroleum, about 40 miles southeast of the Louisiana coast. The blast and the ensuing fire sank the rig, killed 11 men and injured at least 16 more, and caused a catastrophic oil spill one mile below the ocean’s surface that cut a wide swath across the Gulf of Mexico. The Coast Guard’s report succinctly summarized the disaster: “For the nation, the Deepwater Horizon oil well blowout and release was unprecedented in scope, scale, and duration.” 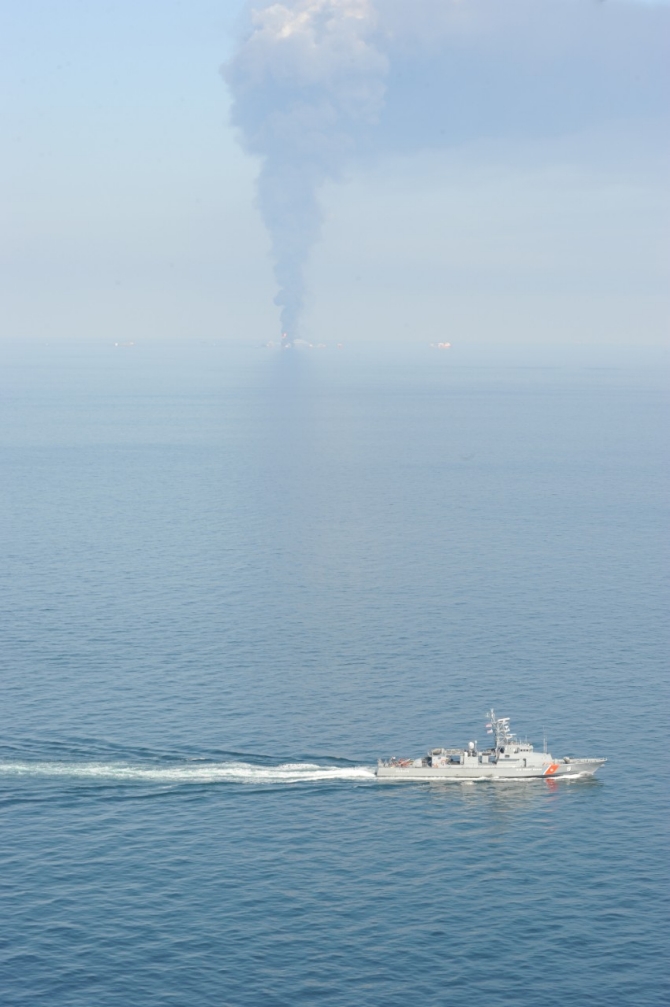 The cutter carried out a fisheries patrol from Pensacola into the Gulf of Mexico during the summer of 2009. Zephyr’s crewmembers boarded and inspected 56 fishing boats, seven of which resulted in their discovering fisheries violations. She also intercepted eight illegal migrants off the coast of southern Texas. The Coast Guard operated her until 30 September 2011, when that service returned Shamal, Tornado, and Zephyr to the Navy at Joint Expeditionary Base Little Creek, Va.