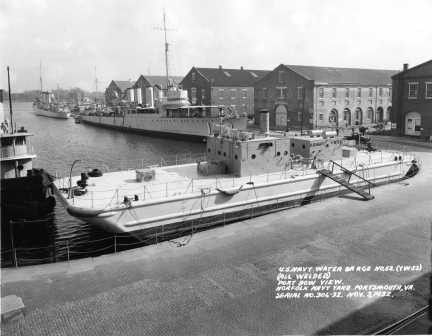 Caption: YW-53 nears completion at the Norfolk Navy Yard, 3 November 1932, while destroyers Breckinridge (DD-148) and Blakeley (DD-150), lie moored in the background, being prepared to resume active service in the reconstituted Destroyer Squadron Two after having been in Rotating Reserve Destroyer Squadron 19. (U.S. Navy Bureau of Ships Photograph in the 19-LCM collection, National Archives and Records Administration, College Park, Md.)

The office of the Chief of Naval Operations deemed YW-53 “surplus to naval needs and [thus]…now available for disposal” on 31 January 1946, and authorized the Commandant of the Fifteenth Naval District to deliver it to the Foreign Liquidation Commission. Although its service life had been estimated at 25 years (the barge was slated for replacement in 1958), YW-53 was sold on 18 October 1946, and stricken from the Naval Register on 28 January 1947. 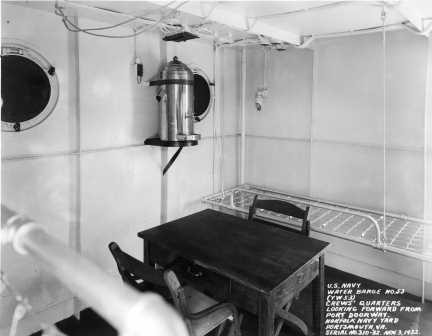 Caption: A Norfolk Navy Yard photographer snapped this view, looking forward from the doorway on the port side of the main deck, showing the small crew’s quarters on board YW-53, 3 November 1932. Note bunk as well as the wooden table and folding chairs, and the coffee maker securely fastened to the bulkhead. (U.S. Navy Bureau of Ships Photograph in the 19-LCM collection, National Archives and Records Administration, College Park, Md.)