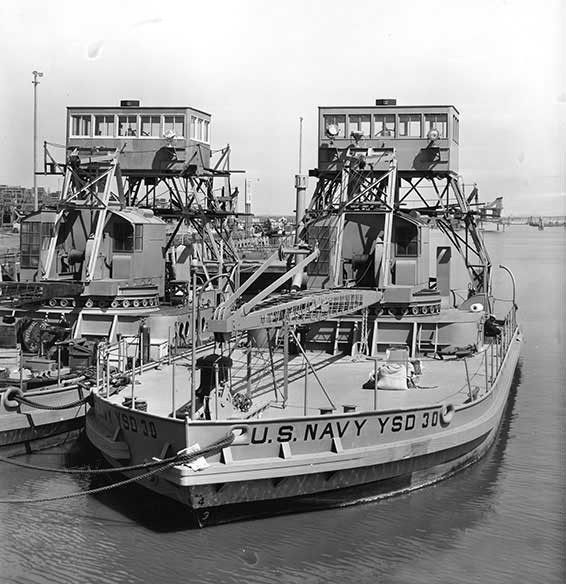 The steel hull self-propelled seaplane wrecking derrick YSD-30 was laid down on 23 April 1941 at Vallejo, Calif., by the Mare Island Navy Yard, with her initial prospective assignment the Thirteenth Naval District, at Unalaska (8 May 1941). YSD-30 was launched on 25 June 1941, but it’s potential assignment, however, changed three more times as the year progressed, first to the prospective Naval Air Station (NAS), Palmyra Island, in the Fourteenth Naval District (12 September 1941), then to the prospective NAS Wake Island, also in the Fourteenth Naval District (6 October 1941), then back to Palmyra (5 November 1941). Its completion date changed as the year 1942 progressed, too, something most likely attributable to wartime construction and repair priorities at that major west coast yard.

Completed on 18 July 1942, YSD-30 was towed to Pearl Harbor by the cargo ship Sirius (AK-15). The seaplane wrecking derrick served at Palmyra for the duration of World War II. A little over a year after the conclusion of hostilities in the Pacific, Commandant, Fourteenth Naval District (ComFourteen) reported YSD-30 to be “in bad condition and unseaworthy” on 29 August 1946. The office of the Chief of Naval Operations (CNO) requested on 5 September 1946 that ComFourteen lift the vessel to Pearl Harbor in a tank landing ship (LST), then take steps “to place [YSD-30] in satisfactory operating condition.” A CNO letter of 10 October 1946 assigned the vessel to ComFourteen in an “out of service, in reserve,” status. On that same date, the commanding officer, NAS Palmyra, reported YSD-30 “in good material condition except for normal external deterioration of hull” and asked that the vessel be towed to Hawaii.

YSD-30, however, sank on 8 December 1946 after leaving Palmyra under tow, and was stricken from the Naval Register on 28 January 1947. 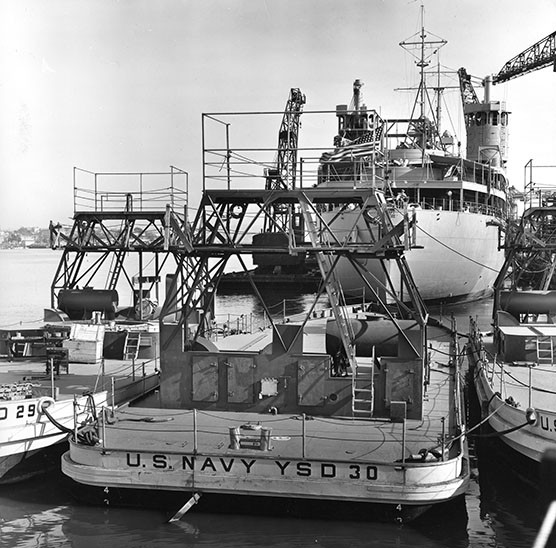 Caption: YSD-30, painted in what appears to be the peacetime white and spar color, with it’s designation in black on it’s hull, fits out at the Mare Island Navy Yard, 1 October 1941, flanked by sister craft YSD-29 (L) and YSD-31 (R). YSD-30’s crane is yet to be fitted, and bridge is still unenclosed as this stage. The new submarine tender Fulton (AS-11), commissioned since 12 September 1941, fits out in the background. (U.S. Navy Bureau of Ships Photograph, National Archives & Records Administration, Still Pictures Branch, College Park, Md.)