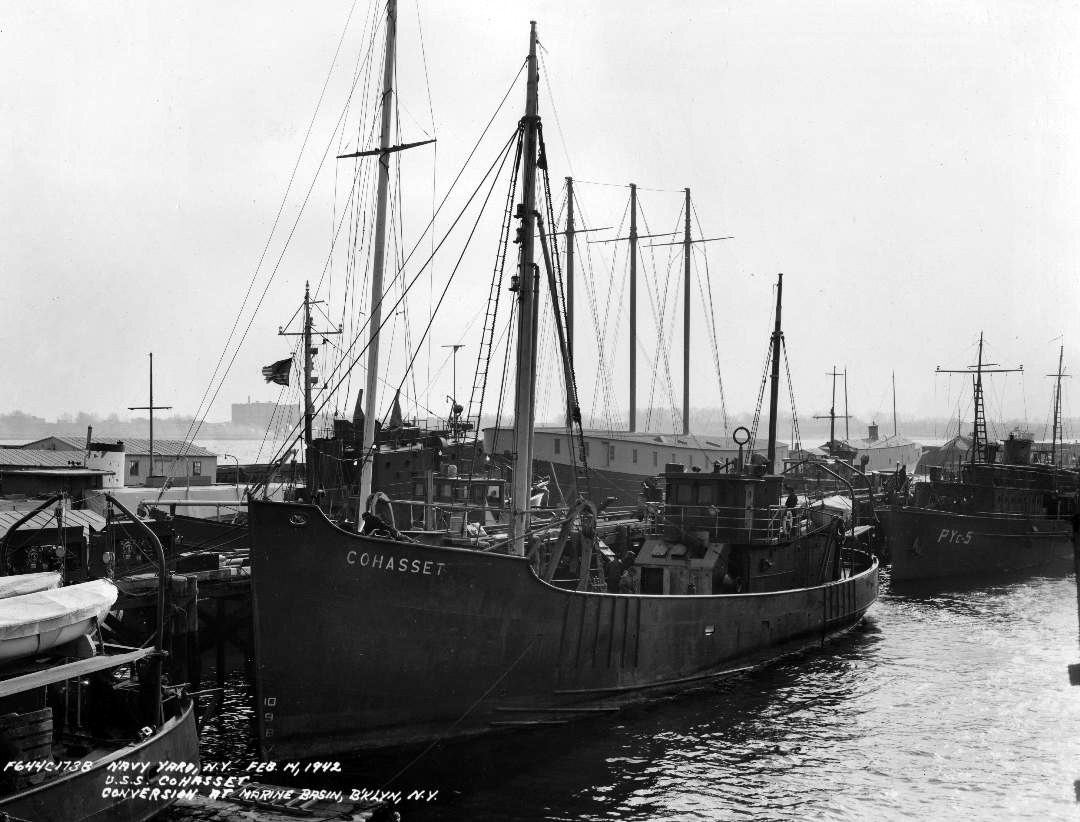 Reassigned to the local defense forces of the Fifth Naval District, for service off the Hatteras Mine Area, to warn Allied and neutral shipping not to enter those mined waters, YP-389 and YP-388 received orders to depart New London, Conn., on 25 May 1942. Reporting to the Section Base at Staten Island, N.Y., en route, the following day, YP-389 and her sister ship entered the Sullivan Dry Dock & Repair Co., Brooklyn, so, for the former, that workmen could scrape and paint her bottom, and install battle ports, a fresh water tank forward of the crew’s washroom, and a blackout ventilating system for the galley and engine room hatches.

Sailing for Norfolk upon completion of that brief period of maintenance and alterations, the two patrol vessels began to escort a convoy shaping a course for Hampton Roads, but soon found themselves outdistanced by their charges. Eventually standing in to the Naval Operating Base (NOB), Norfolk, Va., YP-389 and YP-388 remained there six days, after which they received orders to report to the Section Base, Morehead City, N.C., to report to Capt. Henry Coyle, USCG, Senior Coast Guard officer at Okracoke Inlet.

Following a five-day patrol (11–16 June 1942), during which YP-389 attempted to test-fire her sole 3-inch/23 caliber gun only to find it inoperable, the ship returned to Morehead City. There, an inspection of the vessel’s main battery revealed a broken firing pin. YP-389 took on provisions soon thereafter, but instead of receiving repairs to the gun, she received orders to proceed to sea for another patrol. She stood out of Morehead City on 17 June.

At 2345 on 18 June 1942, YP-389 was heading on an easterly course, five miles west of the Diamond Shoals Light Buoy, when Sea2c Leroy A. White, acting signalman, “thought he saw a flare about where the buoy was located; the lookout thought it a falling star.” Ens. Ray P. Baker, Jr., D-V(G), 24, the officer of the deck, continued the ship on the heading toward Diamond Shoals, but saw nothing further. At the start of the mid watch on 19 June, Lt. R. J. Philips, YP-389’s officer-in-charge, relieved Ens. Baker, who went below to the stateroom he shared with 22-year old Ens. Robert M. McKellar, D-V(G), YP-389’s engineering and gunnery officer.

As she steamed slowly through the low swells off the Hatteras minefield, YP-389, unequipped with sound gear, had no inkling of the presence of German Type VII C submarine U-701 (Kapitänleutnant Horst Degen, commanding). One month at sea and having recently sown a minefield at the mouth of Chesapeake Bay, U-701 approached, cloaked by the darkness, on the converted fishing vessel’s starboard quarter, as the former trawler steamed on a roughly southwesterly course between the Diamond Shoals Buoy and Buoy No. 4 at about 6.2 knots. At 0220 (Eastern War Time) on 19 June, U-701 opened fire, tracers followed soon by her main battery 88-millimeter gun.

Immediately sounding general quarters, Lt. Philips radioed Coast Guard Station No. 6, at Okracoke Inlet, and received acknowledgement that planes and a ship were on their way to her assistance. He also sent out a distress call to all Fifth Naval District ships and aircraft. With SM2c Gelbert L. MacPherson at the helm, YP-389 went to battle stations. A bursting 88-millimeter shell killed Sea2c Charley F. Hensley as he emerged from the crew’s compartment, forward; the same shell burst mortally wounded F3c John C. Doucette. Another early shell hit started a fire forward, but the YP’s crew put it out quickly with a hose. Although it was known that the 3-inch/23 “was not in firing condition,” some sailors attempted “several” times to fire it without success.

Lt. Philips ordered SM2c MacPherson to steer “all around the compass” to keep YP-389’s stern to the sub, thus presenting the smallest possible target, while two minutes after general quarters had sounded, F2c Vincent W. Crabb opened fire with the Lewis gun on the signal bridge (“the most exposed position on the ship”) and F1c Robert Wilson commenced fire from the boat deck. Kapitänleutnant Degen, meanwhile, maneuvered U-701, with her greater speed and heavier armament, to keep YP-389 from proceeding toward shore. Degen’s gunners, however, found the hull of their plucky adversary, lying low in the water, very difficult to hit. U-701 “maneuver[ed] at will,” Ens. Baker later testified, “firing from first one quarter, then the other. At times she was as close as two hundred yards [away].”

His ship outgunned, Lt. Philips tried to “make to the westward; from where our help could be expected, and to keep the sub on our stern.” At one point, as U-701 closed early in the action, F3c Wilson B. Cole, at the depth charge tracks, released two charges that exploded. Cole released a second pair, but one proved a dud. Machine gun fire from U-701 struck down F1c Wilson at the Lewis mounted on the boat deck, and he fell, unconscious. Soon, shellfire struck Cole, whom Lt. Philips later praised as exhibiting “stubborn persistence in the fulfillment of his duty in the face of severe fire,” dead at his battle station astern. Two other men also fell, Sea1c Cornelius F. MacLean and Sea1c Magnus Hia.

The one-sided contest continued unabated for a little over an hour, with YP-389’s valiant gunners expending 24 pans of ammunition between them. An 88-millimeter shell hit the CO2 fire extinguishing system in the engine room, filling the compartment with fumes and forcing the crew to abandon it. Another shell ignited the main fuel tank. As U-701 closed to point-blank range, Lt. Philips, who had taken the wheel himself, ordered “abandon ship.” Up to that point, F2c Crabb had kept up a steady fire from his Lewis on the signal bridge, pausing only long enough to call for more pans of ammunition. Ordered to cease fire, since the source of the Americans’ fire had proved a convenient aiming point, Crabb was descending from his position when a shell hit the charthouse and set it afire, killing him. U-701 having shot away the mainmast and the two life rafts, and the remaining boats too exposed to be lowered, all hands began going over the side with lifejackets only. F1c Wilson, believed dead, regained consciousness in time to abandon ship with the others. Another German shell, apparently an incendiary, hit the pilot house and set it ablaze.

Lt. Philips left YP-389 “under full headway to disguise the fact that [she] was being abandoned.” The ruse apparently worked, for U-701 followed the abandoned ship, putting at least 12 more 88-millimeter shells into her until breaking off the action and retiring eastward on the surface.

“During the course of the action,” Ens. Baker wrote later, “[Lt. Philips] had done everything with the ship that could be done and had moved about and given his orders in the face of continued raking of the decks and superstructures. He set an example to the men that they did not disregard.” In the water, Philips kept the crew together, rounding up the stragglers himself, giving his crew “something of his own calmness and confidence.” F1c Wilson made no complaint of his own wounds and did what he could for others; Sea2c Robert J. Long, likewise seriously wounded like Wilson, proved a “great help” to his shipmates in the water. Sea2c White, who had seen the flare during the first watch on 18 June that, in retrospect, Ens. Baker postulated had been sent up by the U-boat to identify her adversary in the darkness, “showed exceptional calmness and disregard for danger” throughout the action. Ens. McKellar “frequently in an exposed position…aided many of the wounded men.”

At about 0730 on 19 June 1942, Coast Guard boats CG-462 and CG-486 rescued the survivors (and brought in the body of F3c Doucette, who died in the water) and transported them to the section base at Morehead City. The severely wounded Ens. Baker, F1c Wilson, Sea2c Long and Sea2c Robert L. Murch were transported thence to Norfolk Naval Hospital for treatment.

Ironically, the victor in the unequal contest never returned home. A USAAF Lockheed A-29 [Hudson] bombed U-701 and sank her off the North Carolina coast on 7 July 1942, the first USAAF U-boat “kill” of World War II. Only seven of her 43-man complement (one of whom was Kapitänleutnant Degen) survived the boat’s destruction, to be rescued by a USCG seaplane on 10 July 1942.