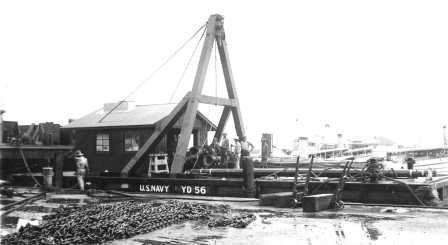 Caption: YD-56 at Cavite Navy Yard on 21 June 1928, most likely soon after it had received its new pontoon. The yard workmen on board give the reader an idea of the size of this little service craft. (U.S. Navy Bureau of Yards and Docks Photograph, RG 71-CA, National Archives and Records Administration, College Park, Md.)

The wooden hull, copper-sheathed, non-self propelled Freight Lighter No. 21 was built in 1907 at Cavite, Philippine Islands, by the Cavite Navy Yard, for service in the Sixteenth Naval District.

Converted to a floating derrick at her building yard in 1920, equipped with a steam derrick, a wooden “A” frame and a 45-ton capacity steel boom, it was reclassified as YD-56 on 17 July 1920. Although earmarked to be replaced in 1927, YD-56 received a new pontoon in 1928 that extended its service life for over a decade.

Shortly before war engulfed the Philippine Islands in the last month of 1941 and the first quarter of 1942, YD-56 was regarded as serviceable and required for the smooth operation of the Asiatic Fleet’s principal repair facility, $759.00 being expended on its upkeep during the 1940-1941 year.

Whether or not the Japanese made use of it, if indeed they found it in serviceable condition, is not known, but the fall of the Philippines prompted the Navy to consider YD-56 as lost due to the enemy occupation, and it was stricken from the Navy List on 24 July 1942.